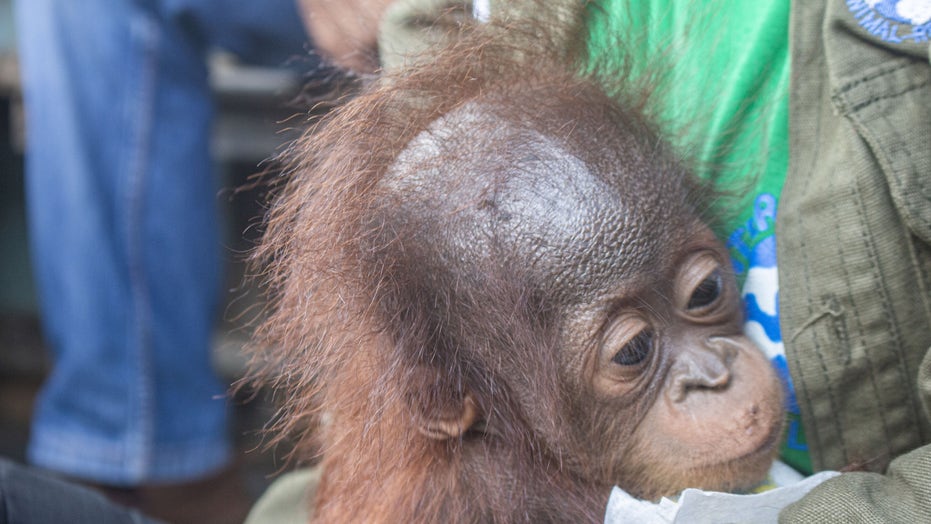 The sweet moment a baby orangutan that had been separated from its mother gets rescued in a remote village was captured in several photos.

The frightened baby ape, named "Aben" by his rescuers, can be seen holding on tightly to conservationists in photographs and video footage provided by SWNS.

These images show the moment a baby orangutan, separated from its mother, was recovered by conservationists in Limpang, a village in Jelai Hulu District, Borneo, Indonesia. (SWNS)

He was saved by a villager who provided him with rice and fruit, but he was suffering from a high temperature when rescuers arrived, SWNS reports.

Karmele Sanchez, program director of IAR Indonesia, thanked the villager for taking "appropriate action by reporting this baby orangutan to the authorities."

She explained to SWNS: "We are also pleased to see an increase in awareness and understanding among the public about orangutans, even in areas far from the city."

A baby orangutan was recovered by conservationists in Limpang, a village in Jelai Hulu District, Borneo, Indonesia. (SWNS)

Orangutans are reportedly an endangered species protected by the Indonesian government, meaning it is illegal for locals to keep the apes as pets -- or hunt them.

According to SWNS, orangutans are some of the smartest primates and are frequently studied for their learning abilities.