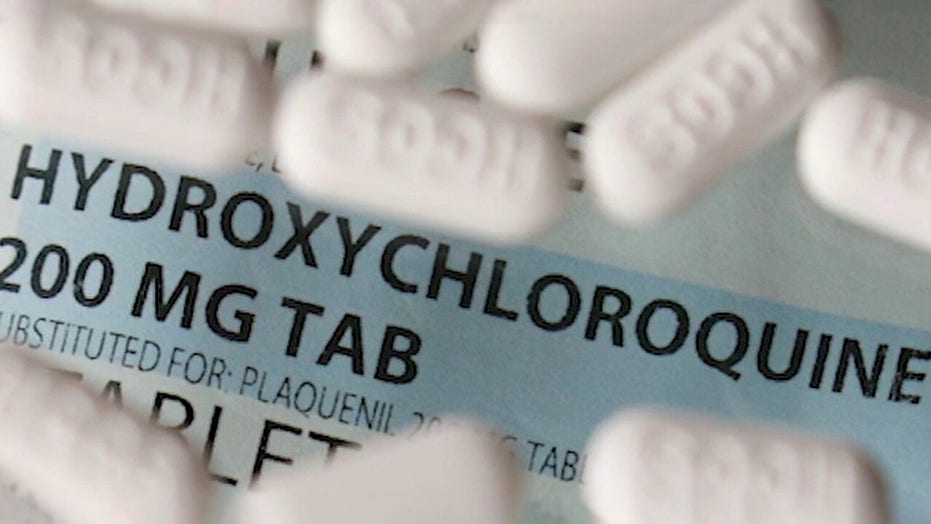 Study finds no benefit to using hydroxychloroquine to treat COVID-19

The malaria drug hydroxychloroquine showed no benefit in a large study of its use at U.S. veterans hospitals, according to researchers; Jonathan Serrie reports.

Malaria drug hydroxychloroquine showed no benefit in a large study of its use at U.S. veterans hospitals, researchers say.

Hydroxychloroquine has garnered global attention during the coronavirus pandemic, most notably from President Trump, who touted it as a potential treatment.

The research, which was published in the medRxiv online depository, evaluated data from 368 COVID-19 patients. The study, which was paid for by grants from the National Institutes of Health and the University of Virginia, has not been peer-reviewed.

“We performed a retrospective analysis of data from patients hospitalized with confirmed SARS-CoV-2 infection in all United States Veterans Health Administration medical centers until April 11, 2020,” the researchers explained. Some 97 patients had been treated with just hydroxycholoroquine, 113 were treated with hydroxycholoroquine and the antibiotic azithromycin and 158 received “standard supportive management” for COVID-19.

In this photo illustration a pack of Hydroxychloroquine Sulfate medication is held up on March 26, 2020 in London, United Kingdom. (Photo by John Phillips/Getty Images)

The two primary outcomes analyzed in the study were death and the need for ventilation.

Hydroxychloroquine made no difference in the need for a breathing machine, either.

“In this study, we found no evidence that use of hydroxychloroquine, either with or without azithromycin, reduced the risk of mechanical ventilation in patients hospitalized with Covid-19,” the researchers said. “An association of increased overall mortality was identified in patients treated with hydroxychloroquine alone. These findings highlight the importance of awaiting the results of ongoing prospective, randomized, controlled studies before widespread adoption of these drugs.”

The nationwide study was not a rigorous experiment but is the largest look so far of hydroxychloroquine with or without azithromycin as a treatment for COVID-19.

The researchers said that the study has certain limitations "including those inherent to all retrospective analyses such as non-randomization of treatments," adding that the results may not be reflective of all patient groups. "Our study cohort comprised only men whose median age was over 65 years. Therefore, the results may not necessarily reflect outcomes in women or in younger hospitalized populations, nor can they be extrapolated to pediatric patients," they wrote. "Our findings may also be influenced by the demographic composition of patients in our cohort, the majority of whom were black. Disproportionately higher rates of Covid-19-related hospitalization among the black population have also been reported in the United States as a whole."

Researchers did not track side effects but noted hints that hydroxychloroquine might have damaged other organs. The drug has long been known to have potentially serious side effects, including altering the heartbeat in a way that could lead to sudden death.

A spokeswoman for the Department of Veterans Affairs said that the research findings should not be seen as definitive. "This was not a clinical trial. It is simply an analysis of retrospective data regarding hospitalized patients," she told Fox News, via email. "The findings should not be viewed as definitive because the analysis doesn’t adjust for patients’ clinical status and showed that hydroxychloroquine alone was provided to VA’s sickest COVID-19 patients, many times as a last resort."

Earlier this month, scientists in Brazil stopped part of a study into a similar drug, chloroquine, after heart rhythm problems developed in one-quarter of people given the higher of two doses being tested.

However, one recent study in France suggested that treating patients with hydroxychloroquine and azithromycin could shorten the length of COVID-19.

As of Tuesday afternoon, more than 2.54 million coronavirus cases have been diagnosed worldwide, at least 804,194 of which are in the U.S. The disease has accounted for at least 174,438 deaths around the world, including at least 43,630 people in the U.S.

Editor's Note: This story has been corrected to reflect that the study in Brazil analyzed the effects of chloroquine.