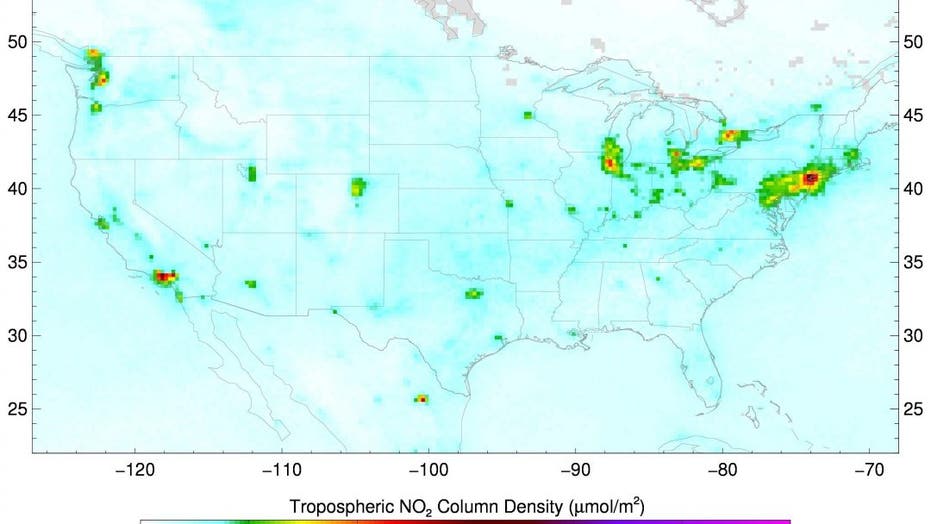 As people stay home because of the coronavirus pandemic, animals have taken over the streets in major cities and the Earth is getting cleaner.

Polar-orbiting satellites from the National Oceanic and Atmospheric Administration have seen a "dramatic reduction" in air pollution because of COVID-19, an occurrence the program's chief scientist, Mitch Goldberg, said has become apparent.

Weekday NO2 concentrations as seen from the Sentinel-5P satellite in March 2020. (Credit: NOAA)

CORONAVIRUS COULD CAUSE LARGEST DROP IN CARBON EMISSIONS EVER: REPORT

“The unintended drop in air pollution levels have become evident,” Goldberg said in a statement. “Observations collected from JPSS and partner satellites are giving NOAA scientists the ability to see how urban and industrial locations contribute to a region’s air pollution through the emissions of gasoline-based gases and fine particles.”

The pictures come from the European Space Agency's Sentinel-5P satellites.

NO2 concentrations as seen from the Sentinel-5P satellite in March 2019. (Credit: NOAA)

The agency noted that nitrogen dioxide (NO2) is a "key component" of air pollution and since people are driving significantly less as they work from home and abide by stay-at-home practices, NO2 emissions are particulate pollution have dropped significantly.

The satellites took images from March 2019 and compared them to March 2020, while also comparing the differences seen in weekdays and weekends during the same time period. The differences were drastic, NOAA noted.

Weekend NO2 concentrations, as seen from the Sentinel-5P satellite in March 2020. (Credit: NOAA)

"The air pollution data showed that the U.S. economic slowdown has reduced vehicular traffic, especially when considering the class of vehicle. While truck traffic has only decreased by about 20 percent since February 16, 2020, according to the Ozone Transport Commission, car traffic nationwide has dropped by about 50 percent or more," NOAA explained. "The results even show an additional reduction of all vehicle traffic on weekends."

"Even more remarkable is the difference in NO2 emissions between weekdays and weekends in March 2020," the agency continued. "Despite substantially reduced NO2 pollution in general during March 2020, there are even more discernible reductions on weekends due to reduced traffic."

While NOAA pointed out that changes in NO2 levels can sometimes be affected by the weather, it's clear that the pandemic is having an effect. Just how much of an effect is a matter for further study, Shobha Kondragunta, lead scientist for JPSS and GOES-R aerosols and atmospheric composition science team, added.

In mid-April, NASA said it witnessed a 30 percent drop in air pollution in the northeastern part of the U.S., attributable to the pandemic.

The declines in emissions aren't just happening in the U.S., though. Satellite images from mid-March spotted drastic declines over Italy and China.

In early March, satellite imagery from NASA and the ESA captured an enormous decline in airborne pollutants, specifically NO2, in large areas of China, including the original epicenter of the outbreak, Wuhan, China.

According to a recent report from the International Energy Agency, worldwide energy demand is predicted to drop by 6 percent this year.

The lowered energy demand could reduce greenhouse gas emissions that fuel climate change by almost 8 percent for 2020, which would be the largest annual decrease ever recorded, the IEA said.

As of Wednesday afternoon, more than 3.7 million coronavirus cases have been diagnosed worldwide, more than 1.2 million of which are in the U.S., the most impacted country on the planet.