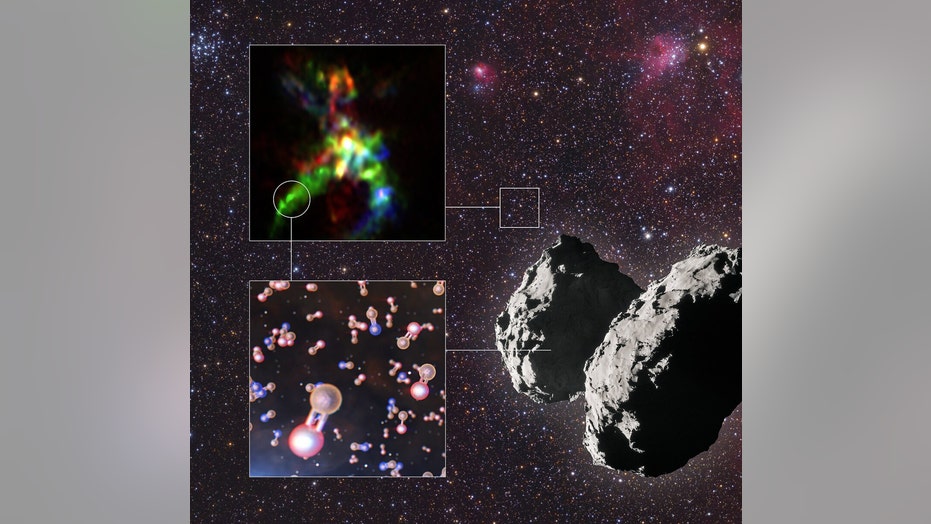 A new study suggests that comets had a huge hand in helping life form on Earth, bringing integral elements such as phosphorus, "an essential element for life," to the planet.

The research utilized the Atacama Large Millimeter/submillimeter Array (ALMA) telescopes in Chile, as well as the European Space Agency's Rosetta spacecraft, to look at the AFGL 1542 star-forming region. They found molecules such as phosphorus monoxide.

"Life appeared on Earth about 4 billion years ago, but we still do not know the processes that made it possible," says Víctor Rivilla, the lead author of the study, in a statement.

This infographic shows the key results from a study that has revealed the interstellar thread of phosphorus, one of life's building blocks. Thanks to ALMA, astronomers could pinpoint where phosphorus-bearing molecules form in star-forming regions like AFGL 5142. (ALMA (ESO/NAOJ/NRAO), Rivilla et al.; ESO/L. Calçada; ESA/Rosetta/NAVCAM; Mario Weigand, SkyTrip.de)

The research has been published in the journal Monthly Notices of the Royal Astronomical Society and a version of it can be read here.

In AFGL 1542, stars are created from enormous clouds comprised of gas and dust, as well as the building blocks of life, notably phosphorus. Phosphorus molecules are created as these stars are born and they release radiation, with the molecules traveling through space.

After observing AFGL 1542, researchers looked at the comet 67P/Churyumov-Gerasimenko using the Rosetta spacecraft in the Solar System to see if the phosphorus molecules were present — and they were.

Kathrin Altwegg, an author on the study, said she was clued into finding the phosphorus molecules after she was approached by another astronomer who looked at star-forming regions with ALMA. "She said that phosphorus monoxide would be a very likely candidate, so I went back to our data and there it was!"

"Since comets may have delivered a significant amount of prebiotic material to the early Earth, this finding suggests that [phosphorus] could contribute significantly to the phosphorus reservoir during the dawn of our planet," the researchers wrote in the study's abstract. "There is evidence that [phosphorus] was already in the cometary ices prior to the birth of the Sun, so the chemical budget of the comet might be inherited from the natal environment of the Solar System, which is thought to be a stellar cluster including also massive stars."

Researchers had previously detected phosphorus in a haze around the comet but were not certain how it got there.

As not all of the phosphorus molecules are used to make stars, the leftovers can become asteroids and comets and bring life, an idea known as panspermia.

Panspermia is the hypothesis that life on Earth originated from microorganisms in outer space that were carried here unintentionally by objects such as space dust, meteoroids and asteroids, according to an article on NASA's website.

"Phosphorus is essential for life as we know it," Altwegg added. "As comets most probably delivered large amounts of organic compounds to the Earth, the phosphorus monoxide found in comet 67P may strengthen the link between comets and life on Earth."

A separate study published last year identified isotopes of selenium in rocks in the Earth's mantle and found identical isotope signatures inside certain meteorites, notably those from the outer Solar System.