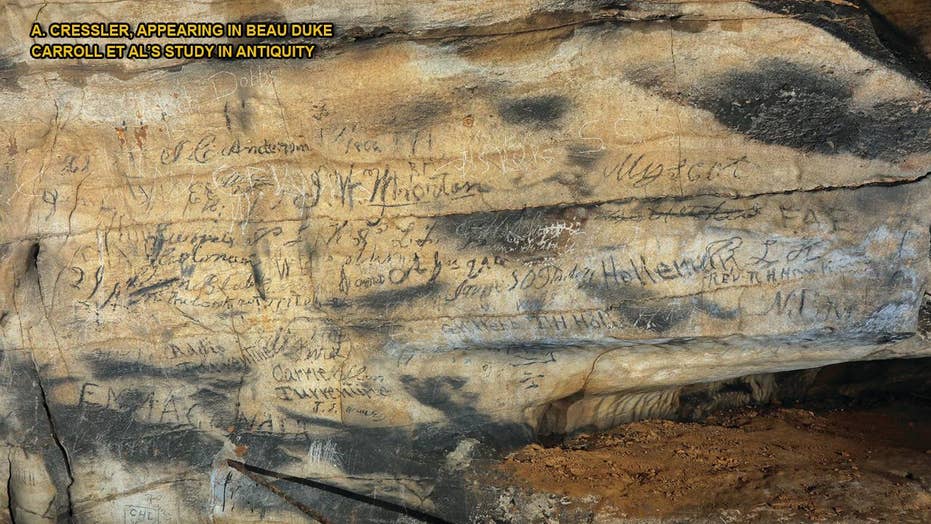 Ancient inscriptions inside Manitou Cave, near Fort Payne, Alabama, have finally been deciphered thanks to a team of archaeologists and Cherokee scholars. The inscriptions make reference to the leaders of a game of 'stickball,' the Cherokee version of lacrosse, as well as sensitive religious matters. They offer a fascinating glimpse into secluded sacred ceremonies that were carried out at a time of crisis for the Cherokee.

Archaeologists and Cherokee scholars have teamed up to decode a set of mysterious tribal inscriptions written in an Alabama cave.

The inscriptions inside Manitou Cave, near Fort Payne, are evidence of the tribe's syllabary, which the Cherokee scholar Sequoyah developed using symbols for each sound. It was formally adopted as the tribe's official written language in 1825.

Experts published their study of the inscriptions in the journal Antiquity.

The Manitou Cave, with Cherokee syllabary visible on the ceiling (A. Cressler, appearing in Beau Duke Carroll et al’s study in Antiquity)

The first inscription makes reference to the leaders of a game of “stickball,” the Cherokee version of lacrosse, that occurred in April 1828. With players entering the cave before the games and during intermissions, another nearby inscription reads: “We who are those that have blood come out of their nose and mouth.”

The study’s authors explain that stickball was a ceremonial event that often lasted a number of days. “Each team undergoes ritual preparation in private before the game, and access to purifying sacred waters is necessary,” they say. “This is the event recorded on the walls of Manitou Cave — the ballgame players preparing themselves spiritually for the game and cleansing themselves in the secluded subterranean waters.”

Another decoded inscription, which addresses sensitive religious matters, was written backwards. The researchers note that the inscription was written as if addressing readers inside the rock itself. “If Manitou Cave was seen as a portal to the spirit world, then words must be written backwards to be legible to the spirit residents,” they explain.

The inscriptions offer a fascinating glimpse into secluded sacred ceremonies that were carried out at a time of crisis for the Cherokee. “Pressures from the surrounding white populations disrupted the Cherokee ancient lifeways, culminating in their forcible relocation in the 1830s along the Trail of Tears,” the authors explain.

The cave inscriptions offer a glimpse into the lives of the local Cherokee tribe. (A. Cressler, appearing in Beau Duke Carroll et al’s study in Antiquity.)

A host of Native American tribes in the southeastern U.S. were forced to leave their homes and give up their lands in exchange for federal territory west of the Mississippi following the Indian Removal Act of 1830. The resulting forced migration is known as the Trail of Tears.

“In May 1838, the Cherokee removal process began. U.S. Army troops, along with various state militia, moved into the tribe’s homelands and forcibly evicted more than 16,000 Cherokee Indian people from their homelands in Tennessee, Alabama, North Carolina, and Georgia,” explains the National Park Service, on its website. “The impact of the resulting Cherokee ‘Trail of Tears’ was devastating. More than 1,000 Cherokee – particularly the old, the young, and the infirm – died during their trip west, hundreds more deserted from the detachments, and an unknown number – perhaps several thousand – perished from the consequences of the forced migration.”

More than 46,000 Native Americans were forced to leave their homes as a result of the Indian Removal Act, according to National Geographic.

“Although the Cherokee were forcibly removed from Alabama, their words on the walls of Manitou Cave endure,” explain the authors of the study published in Antiquity.

In recent years, experts have been unearthing new details of centuries-old sites in the U.S. In one project, for example, archaeologists discovered incredible evidence of a huge Wichita Indian town in Kansas that was once home to 20,000 people.

A team of archaeologists and Cherokee scholars has decoded the mysterious inscriptions. (Photograph credit: A. Cressler, appearing in Beau Duke Carroll et al’s study in Antiquity)

In another recent project, archaeologists uncovered an “unprecedented” 7,000-year-old Native American burial site beneath the Gulf of Mexico off the coast of Florida.

The Associated Press and Fox News’ Travis Fedschun contributed to this article.