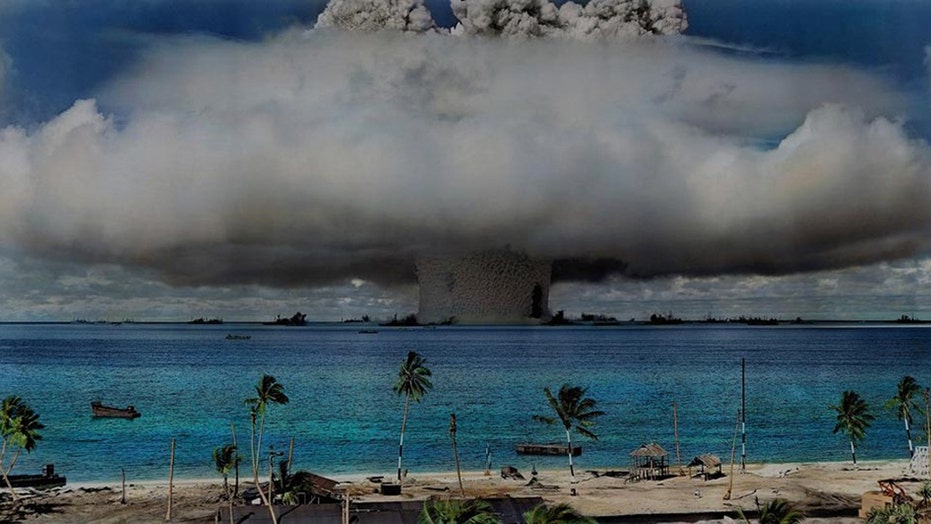 A series of studies have concluded that the radiation levels in parts of the Marshall Islands, where nuclear weapons were tested more than 60 years ago, is "higher than Chernobyl."

The studies, published in the scientific journal Proceedings of the National Academy of Sciences, demonstrate that the concentration of nuclear isotopes on some of the islands "was well above the legal exposure limit" in agreements that were coordinated between the U.S. and Republic of the Marshall Islands. Soil samples, ocean sediment and various fruit were measured by the studies.

The United States used the Marshall Islands as a testing ground for 67 nuclear weapon tests from 1946 to 1958, causing human and environmental catastrophes that persist to this day. (Credit: World Future Council)

“Based upon our results, we conclude that to ensure safe relocation to Bikini and Rongelap Atolls, further environmental remediation... appears to be necessary to avoid potentially harmful exposure to radiation,” wrote the study authors, including Columbia University associate professor Ivana Nikolic Hughes.

The Marshall Islands are situated between Hawaii and Australia and many of them are still uninhabitable as a result of the nuclear tests.

"High-yield thermonuclear explosions cause enormous radioactive contamination to the environment," according to one of the study's abstracts. "These 'hydrogen bombs,' when tested on small islands in the ocean, vaporize the land and produce radionuclides that settle in the ocean sediment. Even decades later, significant contamination may remain in the sediment surface and deep into the sediment layers."

According to the studies, the gamma radiation levels found on Bikini and Naen Islands were as high as 648 millirems and 460 millirems, respectively.

The Environmental Protection Agency says that exposure of "a one-time uniform whole-body exposure of 100 millisieverts (10 rem) or lower" would be considered safe for approximately 99 percent of individuals. Ten rem is equal to 10,000 millirems.

Sixty-seven nuclear bombs from the U.S. were detonated on the islands between 1946 and 1958, including the largest, known as “Castle Bravo.” This occurred in 1954, during the early part of the Cold War, at Bikini Atoll.

"Castle Bravo" was "1,000 times more powerful than either of the bombs dropped on the Japanese cities of Hiroshima and Nagasaki," according to a statement from Columbia University. When the Castle Bravo test was performed, it caused a 15-megaton explosion and left a crater 0.9 miles wide and 246 feet deep.

Radioactive fallout spread more than 6,800 square miles; traces of radioactive material were found in Australia, India, Japan, the U.S. and as far away as Europe, according to the CTBTO Preparatory Commission.

A previous version of this story said the EPA said the exposure of "a one-time uniform whole-body exposure of 100 millirems (10 rem) or lower" would be considered safe for approximately 99 percent of individuals.” It is 100 millisieverts. Fox News regrets the error.