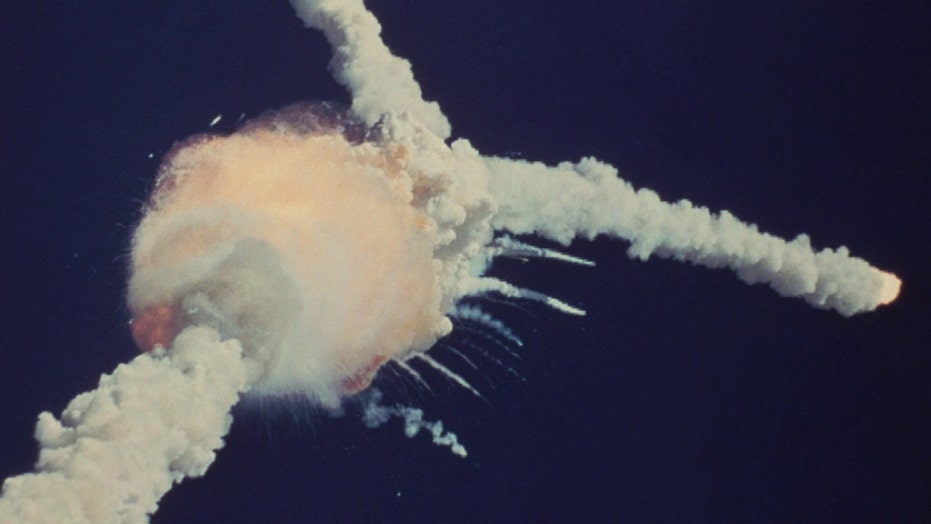 The worst disasters to befall the space race since its beginning

Hundreds of people in Florida and millions watching on live television witnessed the space shuttle Challenger break apart in a mid-air explosion 34 years ago Tuesday, killing everyone on board.

The blast occurred 73 seconds after takeoff from the Kennedy Space Center in Cape Canaveral, Fla. The Challenger's fuel tank collapsed, resulting in an explosion that killed the seven astronauts on board and sent debris flying into the Atlantic Ocean.

One of the crew was Sharon Christa McAuliffe, a 37-year-old high school teacher from New Hampshire and the first civilian ever chosen to go to space.

ARTIFACTS FROM 1986 CHALLENGER DISASTER UP FOR AUCTION

An investigation later determined a design flaw and cold weather led to the accident. In the decades since the space race between the United States and the Soviet Union began, the vast majority of space missions have been successful.

Some have ended in failed launchings and a smaller number have ended with lives lost. Below are some of the some of worst disasters in space.

Seventeen years after the Challenger, NASA suffered another loss when the space shuttle Columbia broke apart during its re-entry into Earth on Feb. 1, 2003. The seven-member crew took off more than two weeks earlier and spent 16 days in space doing science experiments and conducting research.

Re-entry was doomed from the start. During its launch, a piece of foam insulation broke off the shuttle's external fuel tank and tore a hole in the orbiter's wing.

That hole prevented the shuttle from withstanding the fiery re-entry into Earth.

The shuttle began breaking apart on live television before crashing in Texas. NASA recovered 84,000 pieces along with the remains of the crew.

An investigation found design flaws and NASA's safety culture led to the disaster. The episode marked the end of NASA's space shuttle program. The last one was retired in 2011.

The Soviet Union embarked on the Soyuz program at a time when it was fighting for space dominance with the United States. The Soyuz 1 capsule was launched on April 23, 1967 with Soviet cosmonaut Vladimir Komarov on board.

A second capsule, the Soyuz 2, was supposed to carry three cosmonauts and exchange crew members with the first capsule. That launch was eventually called off because of bad weather.

Komarov was one of the Soviet Union's most skilled cosmonauts and engineers. The mission was besieged by infighting between engineers and their superiors, many of who held high-ranking positions in the Communist Party, over design flaws, Space.com reported.

During the mission, problems began almost immediately. Solar panels began to fail and some navigation instruments didn't work and Komarov was ordered to return to Earth. As he entered the Earth's atmosphere, the main parachute on the capsule failed.

A reserve chute also failed to deploy and Komarox crashed-landed and was killed.

The three astronauts killed on the Apollo spacecraft on Jan. 27, 1969, weren't in space, but instead testing the shuttle on the ground.

Gus Grissom, Ed White and Roger Chaffee were loaded into Apollo 1 to conduct a countdown simulation where the spacecraft would run on its own internal power.

The crew of the ill-fated Apollo 1 capsule. From left to right: Grissom, White, Chaffee. Image: NASA

As they sat in the rocket during a countdown delay, a fire broke out inside the cockpit. The blaze spread rapidly and engulfed the spacecraft with the trapped astronauts inside within seconds.

Investigators determined the fire was started by an unknown ignition source. Flammable materials combined with oxygen inside essentially made the capsule a death trap.

By 1971, the U.S. had outpaced the Soviet Union in the space race, landing a man on the moon two years earlier. The Soyuz 11 mission itself went as planned by all accounts.

On June 6, 1971, cosmonauts Georgi Dobrovolski, Vladislav Vokov and Viktor Patsayev were transported to a space station where they remained on board for just over three weeks. Upon their return to Earth, a ventilation valve was jolted open, causing the capsule to depressurize.

An artist's rendering of a Soyuz spacecraft. Image: NASA.

All three men, who were not wearing space suits, were killed inside. The spacecraft made a normal landing and they were found dead by ground crews.

They likely suffocated within 30 minutes before landing, investigators determined.