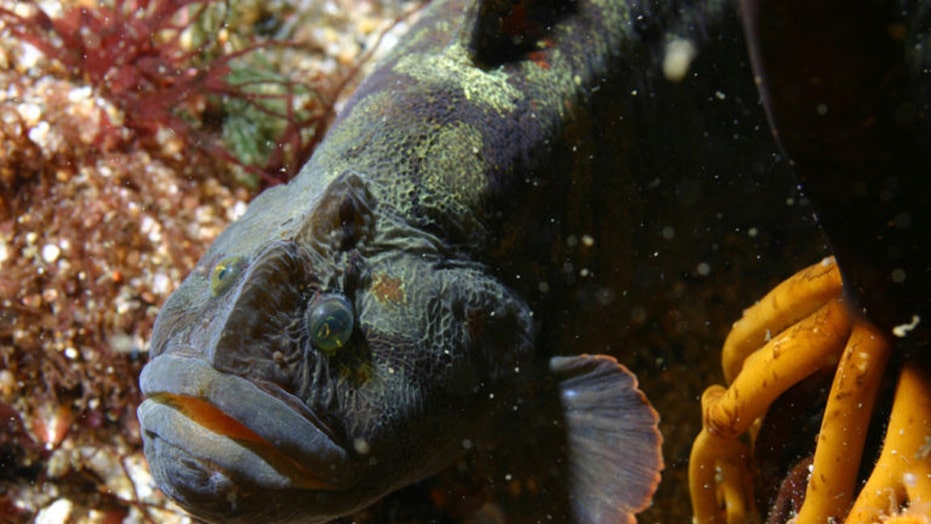 A bizarre-looking fish could be the key to helping solve the world's hunger issue, according to a new study.

Known as the Monkeyface Prickleback (scientific name: Cebidichthys violaceus), the fish has a digestive tract similar to humans, with both small and large intestines and an acidic stomach. It's also among the small number of fish that are vegetarian, living off specialized algae.

“We found that the monkeyface prickleback’s digestive system is excellent at breaking down starch, which we anticipated,” said the study's co-author, Donovan German, in a statement. “But we also learned it has adapted to be very efficient at breaking down lipids, even though lipids comprise just five percent of the algae’s composition. It is a compelling example of what we call ‘digestive specialization’ in the genome.”

The Cebidichthys violaceus, known as the monkeyface prickleback, grows to as much as three feet long and six pounds in weight. (Credit: NOAA/MBARI / Public domain)

Not only is the monkeyface prickleback bizarre in appearance, but it can live on land as well, surviving for 37 straight hours out of water, thanks to its ability to breathe above and below water. It can reach up to three feet in length and weigh as much as six pounds, the researchers added.

Although the fish resides in the Pacific Ocean, it's meat, described as "the new white meat," could be farmed in mass quantities. It could then be fed to people around the world, of significant importance as climate change makes raising livestock "less sustainable," the researchers said in the statement.

“Using plant-based food ingredients reduces pollution and costs less,” the study's lead author, Joseph Heras, added. “However, most aquaculture fish are carnivores and can’t handle plant lipids. Sequencing this genome has provided us a better understanding of what types of genes are necessary for breaking down plant material. If we scan additional fish genomes, we may find omnivorous fish with the right genes that could provide new candidates for sustainable aquaculture.”

It may not have an appealing aesthetic or moniker, but it has become a culinary delicacy around the world. “The taste is actually delicate and mild,” German added.

The research was published in the scientific journal Proceedings of the Royal Society B.

The United Nations Food and Agriculture Organization estimated that approximately 815 million people of the 7.6 billion people, or 10.7 percent of the world's population suffered from "chronic undernourishment" in 2016, the last data publicly available. Causes for hunger include poverty, conflict, political instability, food and agriculture policy and climate change, WorldHunger.org wrote on its website.