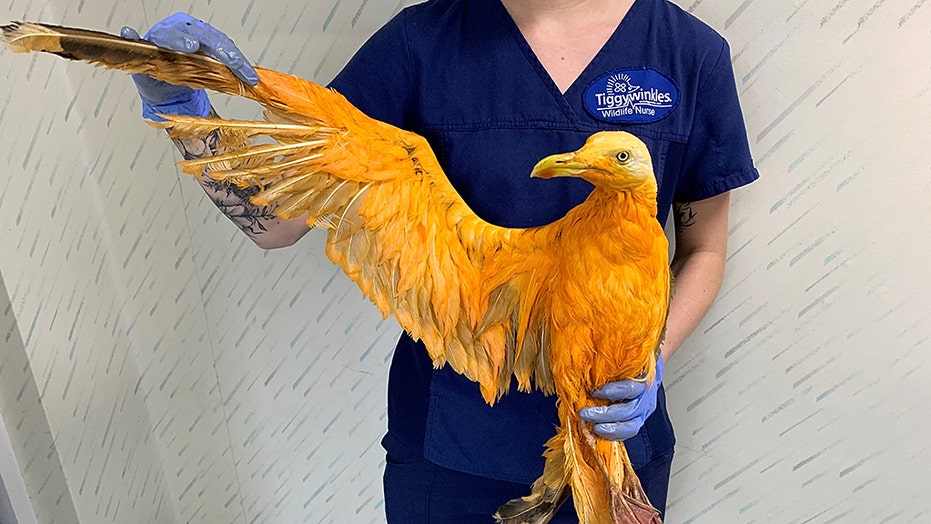 Workers at a U.K. wildlife hospital were stunned when they received a call about a "bright orange" bird rescued at the side of a road.

Staff at Tiggywinkles Wildlife Hospital in Aylesbury, southern England, received the call about the strange-looking animal from concerned members of the public. “When they called to say they had picked up an orange bird, we had no idea what to expect — and would never have guessed at this!” the hospital explained, in a Facebook post.

When the bird was examined, it was found to be a simple herring gull covered in curry powder or turmeric. “It was all over his feathers, preventing him from flying properly,” the hospital explained. “We have no idea how he got into this predicament but thankfully, apart from the vibrant color and pungent smell, he was healthy.”

The unusual-looking bird was taken to a U.K. wildlife hospital. (Splash)

Dubbed ‘Vinny,’ after Vindaloo curry, the gull was bathed by hospital staff. “He managed to cover them in curry water, but eventually did let us scrub him clean,” Tiggywinkles officials explained. “He is now looking much better and should be able to go for release very soon!

24 OF THE WORLD'S MOST BEAUTIFUL CREATURES

"We take in around 12,000 sick and injured wild animals per year, but this is such an unusual happening, and it is wonderful to clean him up and see Vinny fit enough to go back into the wild soon," Steve Smith, Tiggywinkles Vet and Avian Specialist told Fox News, via email.

Other colorful critters have been grabbing attention recently. Earlier this year, for example, a pair of giant multicolored squirrels went viral after they were caught on camera.

The Malabar giant squirrel is known for its unusual multicolored fur and large size.