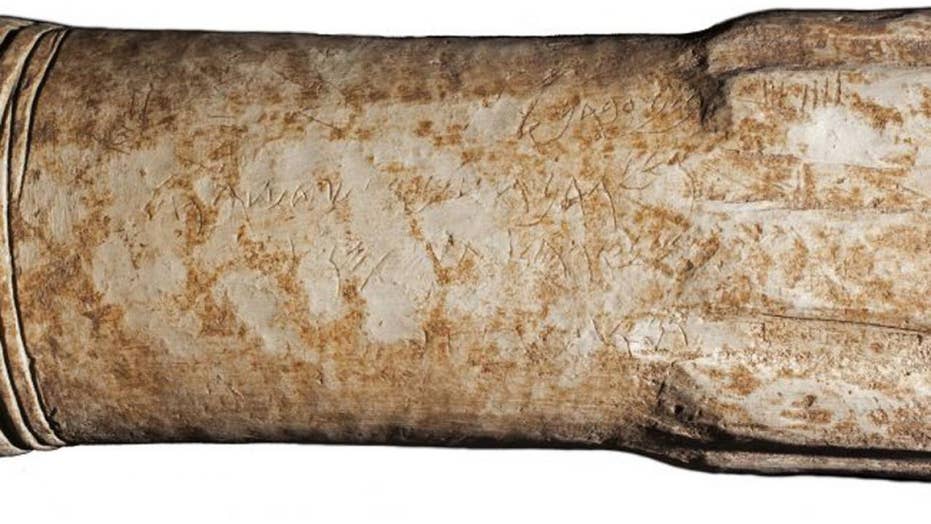 2,800-year-old stone altar gives clues about the takeover of Ataroth in Jordan.

A 2,800-year-old inscribed stone altar, found within a Moabite sanctuary in the ancient city of Ataroth in Jordan, may shed light on an ancient biblical war.

The altar bears two inscriptions. The words are in the Moabite language and script, while the numerals in the inscriptions are in Hieratic (an Egyptian writing system). The altar appears to date to a time after Mesha, king of Moab, successfully rebelled against the Kingdom of Israel and conquered Ataroth (sometimes spelled Atarot), a city that the Kingdom of Israel had controlled. By this time, Israel had broke in two with a northern kingdom that retained the name Israel and a southern kingdom called Judah.

The Hebrew Bible mentions the rebellion, saying that before Mesha rebelled, Moab had to give Israel a yearly tribute of thousands of lambs and a vast amount of ram wool. The rebellion is also described in the so-called Mesha stele discovered in 1868 in Dhiban, Jordan, which claims that Mesha conquered Ataroth and killed many of the city's inhabitants.

The altar was discovered while the sanctuary was being excavated, in 2010. The altar and sanctuary were recently described in the journal Levant.

One of the two inscriptions written on the altar appears to describe bronze that was plundered after the capture of Ataroth. "One might speculate that quantities of bronze looted from the conquered city of [Ataroth] at some later date were presented as an offering at the shrine and recorded on this altar," the researchers wrote in the journal article.

The second inscription on the altar is fragmentary and harder to understand. Part of it appears to say (in translation) that "4,000 foreign men were scattered and abandoned in great number," while another part of the inscription mentions "the desolate city."

"Much remains unclear about this inscription," the researchers wrote, noting that this inscription may discuss events that occurred during Mesha's rebellion against Israel and capture of Ataroth.

Fragrant substances like incense, aromatic woods and oils would have been burned on the altar, said lead author Adam Bean, a doctoral student in the Department of Near Eastern Studies at Johns Hopkins University in Baltimore.

The inscribed altar provides confirmation that the Moabites succeeded in taking over Ataroth, said study co-author Christopher Rollston, a professor of northwest Semitic languages and literatures at George Washington University in Washington, D.C.

The altar also shows that, 2,800 years ago, the Moabites had skilled scribes who used their own script. The inscriptions on the altar "are the earliest evidence we have so far for a distinctive Moabite script," Rollston told Live Science, noting that the inscription discovered in 1868 used the Hebrew script to write the Moabite language.

"We often talk about the sophistication of the scribal education of ancient Israel, and rightfully so, [but the inscriptions on the altar show] that ancient Moab had some gifted scribes as well," Rollston said.

Today, Ataroth is called Khirbat Ataruz. Excavations at the site are led by Chang-Ho Ji, who is dean of education at La Sierra University in Riverside, California.