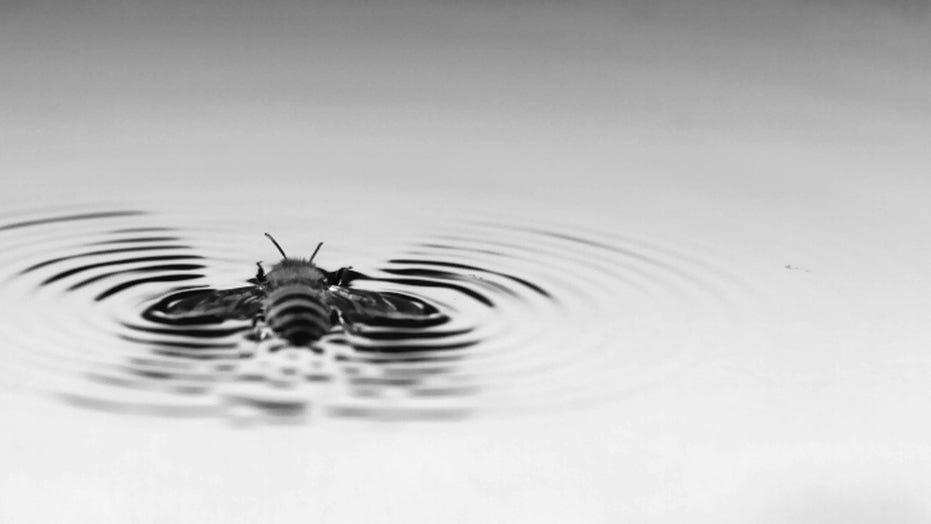 When stuck in water, honeybees are able to use their wings to generate waves that they then surf on to safety, a new study has revealed.

Like most of us, bees get thirsty on hot days. After a long day at the hive slaving away for the queen, they will fly to the local watering hole to drink and cool off. However, this can quickly turn lethal. If their wings make contact with the water surface, it’s very easy for bees to get stuck, and they can drown in a matter of minutes.

Honeybees, however, have found a way out of this dilemma, according to California Institute of Technology engineer Chris Roh, who observed the bees' efforts in a standing water fountain while walking around campus one day.

“It was a hot summer day and this honeybee was apparently trapped on the water surface,” Roh said in an interview with Fox News. “And the sunlight was just right so it cast a shadow on the ripples it was creating. That’s what I first noticed, and then on the water surface, I saw the bee struggling to get out of the water but also moving around quite adequately.”

Roh began observing other honeybees trapped on the surface of standing water. He watched as they would somehow generate thrust, moving across the water as their wings twitched. He collected a few of the insects and took them to his lab, where he and his adviser (and study co-author) Mory Gharib placed them one at a time in a pan of water, so their wings would become stuck to the water.

With a filtered light casting a shadow on the floor of the pan, Roh and Gharib noticed the tiny asymmetrical wave pattern being generated by the wings. Soon after, the bees would start moving along the surface of the water, surfing — albeit very slowly — on the tiny waves.

The act is performed by effectively pulling on the water surface with the sticky underside of their wings, creating tiny waves that can propel them forward.

“When they get stuck on the water, what happens is that the bottom side of the wing gets wet, but the other side is dry,” Roh explained. “And when they try to free themselves, it’s very difficult for them to completely free their wings so that they can regain their aerodynamic ability. So instead what they do is pull on the water that’s stuck on the bottom side of the wing and when they’re pulling on the water, the water pulls on the bee- kind of like they’re playing a tug of war.”

These wingbeats generate a large-amplitude wave with an interference pattern behind the bee that it can then surf on to safety. A slow-motion video showed that the bee's wings curve downward to push down the water and curve upward when pulling up out of the water. This pulling movement propels it forward, and the pushing motion is the bee’s recovery stroke. The bee is also somehow able to keep the water then accelerating towards it from being a deterrent.

“When the bee pulls on the water, water pulls on the bee and it, therefore, moves forward,” Roh added “But the problem with the propulsion pulling effect is that water, once it’s pulled, is moving towards you. So if you interact with that accelerating water, it will probably stop you, so they seem to be doing it so that they pull on the water and then move over it so they don’t have to be slowed down.”

Creating the waves is more taxing than flying, wearing the bee out in an estimated 10 minutes. Hopefully, that’s enough time to make it to shore, where the insect can pull itself out.

According to Roh, the way the bees move on the water is different from any other aquatic insect seen before. He and his fellow researchers are hoping the discovery will lead to a new wave of bio-inspired technology, and they’re currently developing a small robot that can fly through the air as well as move on water.

“A lot of flying in biology seems to rely on the flapping-wing system, but what we’ve thought out [for robotics] is you can keep that flapping wing system to fly but you don’t have to change much,” Roh continued.

“When [the robot] actually falls in water or needs to do any sort of mission on the water surface and have some functionality there, you can use [the wings] by just pulling on the water. So that part is what intrigued us, [that there’s] another way you can move around on the water surface.”

The researcher has been published in the scientific journal PNAS.