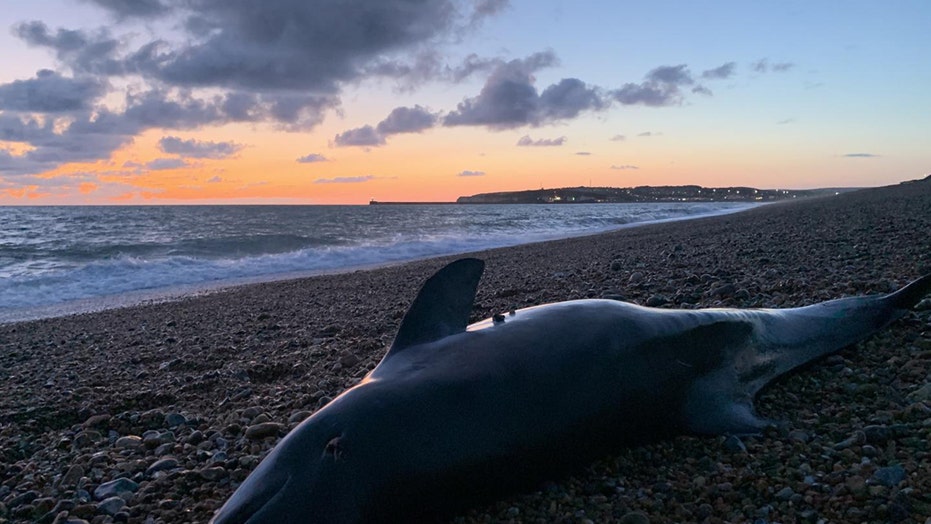 Baby porpoises in the U.K. are being poisoned by what's described as a "cocktail of chemicals" stemming from pollutants in their mother's milk.

The researchers found that the chemicals, which include polychlorinated biphenyls (PCBs), are passed on from the mother to their calves. The longer they remain in the mothers' bodies, the more toxic they are to their offspring, the researchers noted.

"It's a tragic irony that juvenile porpoises are being exposed to a toxic cocktail of chemicals during feeding - when all they're supposed to be getting are the vital nutrients they need for the crucial developmental stage of their life," the study's lead author, Rosie Williams, said in a statement.

This is a harbor porpoise at Seaford. (Rob Deaville)

According to the BBC, PCBs were used in plastics and paints and have long been banned, but remnants of them still exist.

PCBs have also been discovered in whales and dolphins, the BBC added, which cited a recent study that noted dolphins in the English Channel were exposed to a 'cocktail of pollutants.'

"Previously, scientists tended to monitor PCB concentrations by grouping them together and treating them as one chemical, but as we know, they're a group of chemicals with different toxicity levels so it was a bit like trying to measure how much caffeine someone's had — without knowing whether they drank three cans of red bull or three cups of tea," Williams added. "Our study has highlighted the need to change our approach to monitoring PCBs, to look at the composition of individual chemicals, so that we can get a better understanding of the risk posed by these chemicals to our marine wildlife."

In 2018, traces of cocaine and illegal pesticides were found inside freshwater shrimp across 15 different locations across Suffolk, England.

SHARK WOUNDS ARE KEPT 'INFECTION FREE' THANKS TO THIS SHOCKING DISCOVERY

Williams said that studying PCB exposure in species that have abundant populations can help aid in those where the population numbers are dwindling, including orcas, where there are only eight remaining in the U.K.

"As top predators, killer whales are exposed to some of the highest levels of PCBs, because there is an accumulative effect of PCBs as you go up the food chain," Williams added. "It's obvious that marine mammals are still experiencing the lingering impacts of PCBs, so identifying the sources and pathways they're entering our oceans is a vital next step to preventing further pollution."

One of the study's co-authors, Susan Jobling, said the research allows scientists to further understand how prevalent PCBs are and how they impact the environment as well as the animals in the area.

"This research helps further our understanding of these legacy industrial chemical pollutants and the effects that different levels of exposure, in complex mixtures, may have," Jobling said. "Learning more about PCB exposure in juvenile animals is vital, so that we can try to mitigate the impact of these dangerous chemicals on populations and help protect the future status of marine mammals in U.K. waters."

The research is published in the scientific journal Science of the Total Environment.