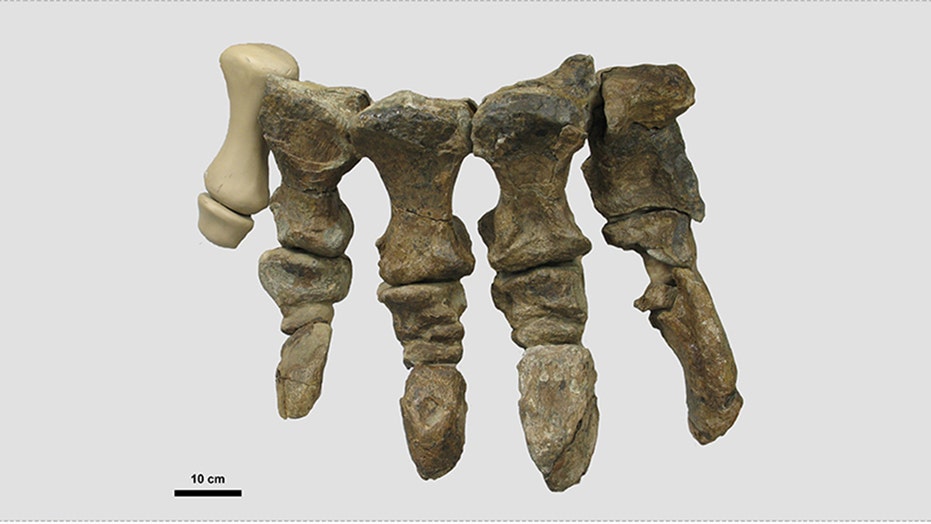 An Australian dinosaur appears to have walked on a natural kind of “high heel,” researchers suggest.

The Rhoetosaurus brownei -- a 24-ton, or 52,910-pound sauropod, which is a long-necked herbivorous dinosaur -- walked with an elevated heel, University of Queensland (UQ) Ph.D. candidate Andréas Jannel said in a press release Friday.

“Looking at the bones of the foot, it was clear that Rhoetosaurus walked with an elevated heel, raising the question: how was its foot able to support the immense mass of this animal, up to 40 tons?” Jannel said.

His findings were published in April in the Journal of Morphology.

“Our research suggests that even though Rhoetosaurus stood on its tiptoes, the heel was cushioned by fleshy pad,” Jannel said. “We see a similar thing in elephant feet, but this dinosaur was at least five times as heavy as an elephant, so the forces involved are much greater.”

Jannel and his colleagues at the UQ Dinosaur Lab studied the fossil of a Rhoetosaurus -- Australia’s only named Jurassic sauropod -- which was found in southwest Queensland and had been dated between 160-170 million years ago.

The scientists used a replica of the fossil to help them test and understand how the bones of the dinosaur’s foot moved when it walked and used 3D modeling to analyze different postures of the foot.

They also studied other sauropod footprints around the world, which also showed signs of a naturally padded heel.

“The addition of a cushioning pad that supports the raised heel appears to be a key innovation during the evolution of sauropods, and probably appeared in early members of the group some time during the Early to Middle Jurassic Periods,” he said.

“The advantages of a soft tissue pad may have helped facilitate the trend towards the enormous body sizes we see in these dinosaurs,” Jannel added.

Jannel is now studying stress distribution within the bones of the foot in order to give “mechanical evidence for the presence” of the padded heel.

“It can be a tedious and time-consuming process, but I’ve always been fascinated by paleontology, particularly the link between form and function in extinct animals,” he said.

“There’s so much more to know, but it’s amazing to discover that becoming ‘high-heeled’ might have been an important step in the evolution of sauropod dinosaurs,” he added.