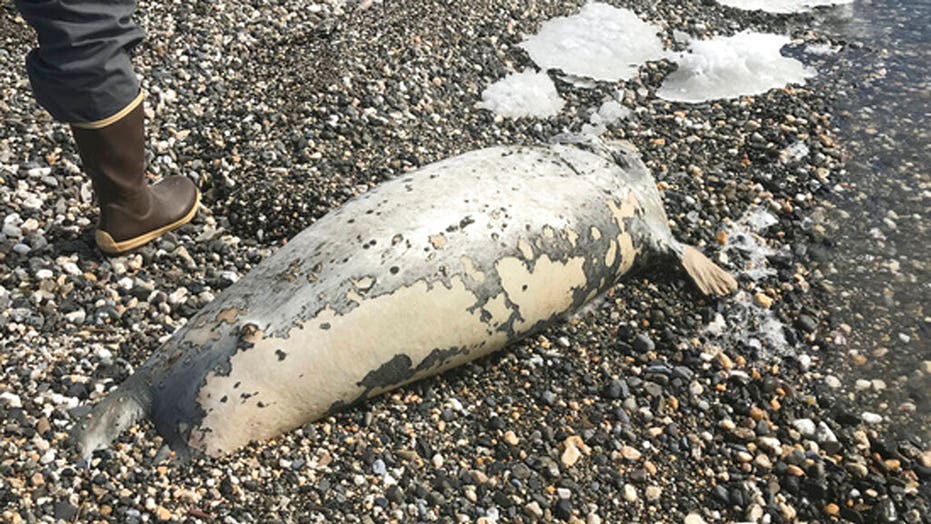 The discovery of at least 60 dead ice seals that have been found along Alaska's west coast in recent months is baffling federal biologists, who said the deaths have been reported in "unusually large numbers."

The National Oceanic and Atmospheric Administration (NOAA) said it's received multiple reports about dead bearded, ringed and spotted seals near south of Nome and north of the Bering Strait.

This photo from May shows a dead seal found on a beach near Kotzebue, Alaska. (Raime Fronstin/National Park Service via AP)

On Friday alone, a hunter from the village of Kotlik said he found 18 seal carcasses along 11 miles of shoreline — a discovery he described as overwhelming.

“I couldn’t believe there were so many dead,” Harold Okitkun told the Anchorage Daily News. “It tears at my heart because we live off of the seals.”

Okitkun also reported finding dozens of other dead seals along an island near Stebbins. On May 10, eight young bearded seals were found on St. Lawrence Island.

North of the Bering Strait in the Chukchi Sea, a National Park Service biologist counted six dead seals near Kotzebue's airport. NOAA Fisheries also received accounts of up to 30 dead seals between Kivalina and Point Hope.

“At this point, we don’t know what’s going on,” Julie Speegle, spokeswoman for NOAA Fisheries Alaska Region, told the news outlet. “We are mobilizing crews to go out and collect some samples and try to investigate what’s happening.”

Some of the seals had experienced hair loss. Abnormal molting was present during the deaths of ice seals and walruses from 2011 to 2016 and led NOAA Fisheries to investigate after declaring an unusual mortality event in the Bering and Chukchi seas.

A definitive cause for the abnormal molting was not identified. Over that time period, officials believe an estimated 657 seals were affected.

Biologists confirmed 233 dead and stranded ringed, bearded, spotted and ribbon seals and 179 killed by hunters. Another 245 were found with abnormal molting during health assessments.

Ice seals are "an essential resource for Alaska Native communities," NOAA said. The discoveries have sparked food safety concerns, as some are worried about contamination among the seals.