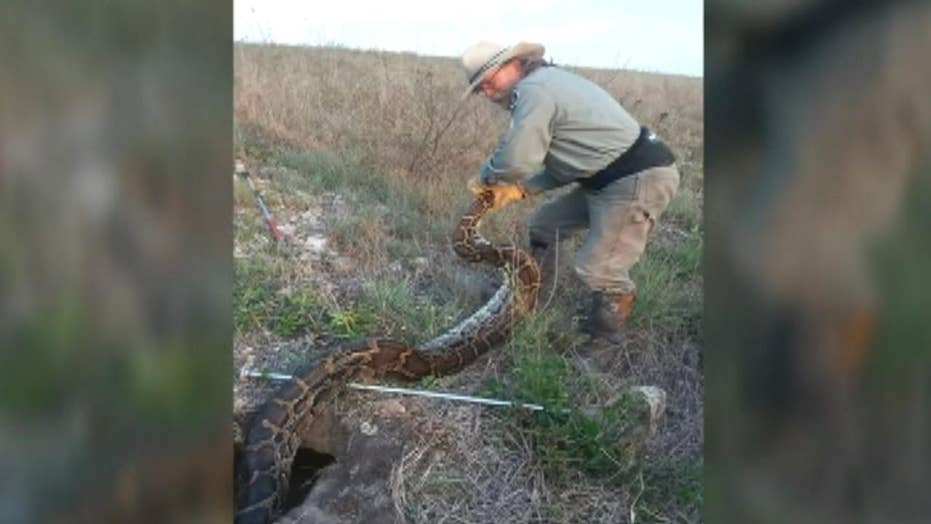 In a state known more for its alligators, there is a new job title: Pro python hunter.

An estimated 100,000 pythons are living in and ravaging Florida’s Everglades. They will eat 160 animals in five years and have no enemies.

Even alligators are no match for the Burmese python. A 13-footer caught and killed recently had three baby deer in its belly.

The invasive snakes got here after pet owners ditched them in the swamps and, over the years, they have multiplied exponentially.

Florida Fish & Wildlife said the pythons have decimated the state’s small mammal population. In Miami-Dade County, the South Florida Water Management District decided Florida’s python problem has become so big and so bad, paying for a “python posse” to find and kill them could be the answer.

It’s a two-month, $175,000 pilot program. Twenty five python hunters get paid $8.10 an hour to drive, hike and crawl in the hot and humid Everglades, looking for snake dens and wrestling the big beasts to the death.

"The cool thing for us, as Swamp Apes, in looking for pythons is first and foremost, pythons are cool, man,” says Tom Rahill, one of the snake hunters. "They're huge and I'm a country boy and we get to jump on snakes.”

SNAKE FAN HUNTS PYTHONS IN FLORIDA TO SAVE OTHER CRITTERS

Rahill founded “Swamp Apes,” a loose-knit club which specializes in not only removing pythons, but taking veterans out into Florida’s buggy backcountry to save the ecosystem and try to restore the natural Everglades.

"It's really soothing, that's a good term to use and just being out here in nature and searching for the pythons,” he said, “there's nothing like it.”

As veteran Tom Aycock and his wife Melanie caution, it is a very hard and tedious mission.

“We can log in many, many hours, sometimes days and days, without finding a python,” Aycock said. “And then there are days we’ll find 13 in one day,” added Melanie.

Florida has twice held well-publicized “Python Challenges,” where 1,500 amateur snake hunters from around the country put their wrangling skills to the test. But Water District Chairman Dan O’Keefe said using the 25 experts, and paying them, is proving to be much more effective.

Because of that, O’Keefe said he anticipates making the program permanent, which could generate one of the coolest business cards in the state, “professional python hunter.”

About half of the pythons captured and killed were females. And when each female can lay 40 eggs per clutch, that translates into thousands of additional baby pythons that will now never be born in the vastness that is the Florida Everglades.