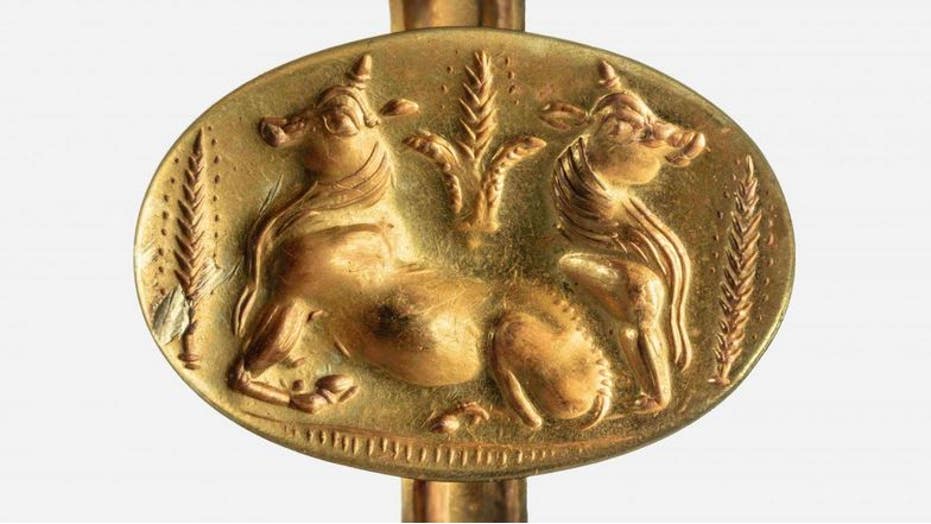 Archaeologists have discovered a trove of engraved jewelry and gold artifacts in two Bronze Age tombs that could shine a new light on life in ancient Greece.

The discovery was announced on Tuesday in Greece. The team had spent more than 18 months excavating and documenting their findings -- including a multitude of cultural artifacts and beautiful jewelry -- that could add to our understanding of early Greek civilization.

The University of Cincinnati (UC) archaeologists found a gold ring depicting two bulls flanked by sheaves of grain, which was identified as barley by a paleobotanist who consulted on the project.

"It's an interesting scene of animal husbandry -- cattle mixed with grain production. It's the foundation of agriculture," UC archaeologist Jack Davis said in a statement. "As far as we know, it's the only representation of grain in the art of Crete or Minoan civilization."

Some of the artwork featured mythological creatures, as well. An agate sealstone featured two lion-like creatures called genii standing upright on clawed feet. According to UC archaeologist Sharon Stocker, they carry a serving vase and incense burner -- a tribute for the altar before them, featuring a sprouting sapling between horns of consecration.

A 16-pointed star is seen above the genii. That same star appears on a bronze and gold artifact in the grave, researchers said.

"It's rare. There aren't many 16-pointed stars in Mycenaean iconography. The fact that we have two objects with 16 points in two different media (agate and gold) is noteworthy," Stocker explained in a statement.

UC archaeologists found a sealstone made from semiprecious carnelian in the family tombs at Pylos, Greece. The sealstone was engraved with two lionlike mythological figures called genii carrying serving vessels and incense burners facing each other over an altar and below a 16-pointed star. The other image is a putty cast of the sealstone. (University of Cincinnati Classics Department)

The scientists believe the two tombs paint a picture of princely wealth and status.

"I think these are probably people who were very sophisticated for their time," Stocker said. "They have come out of a place in history where there were few luxury items and imported goods. And all of a sudden at the time of the first tholos tombs, luxury items appear in Greece."

"You have this explosion of wealth and people are vying for power," she added. "It's the formative years that will give rise to the Classical Age of Greece."