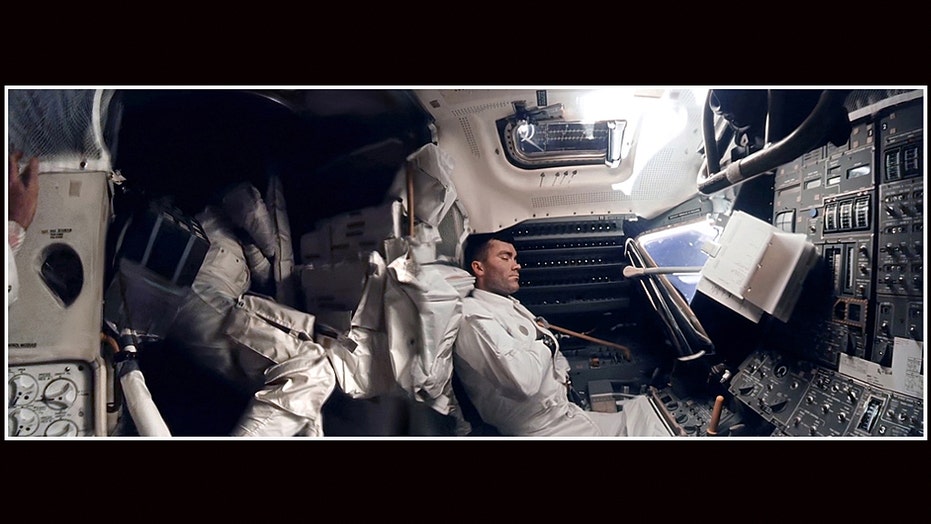 To commemorate the 50th anniversary of the Apollo 13 mission, a panoramic high-definition image of astronaut Fred Haise napping in the “lifeboat” Lunar Module has been produced.

The ill-fated mission to the moon launched on April 11, 1970, but was aborted 56 hours later when an oxygen tank in the spacecraft’s Service Module exploded. Haise and fellow astronauts Jim Lovell and Jack Swigert had to turn the Apollo 13 Lunar Module into a “lifeboat” to help them make it safely back to Earth.

The panoramic image, which was produced by photography specialist Andy Saunders, attempts to provide an insight into what Lovell saw as he surveyed the Lunar Module. "Step into the boots of Commander Jim Lovell (hand, left) as he keeps watch over his ship and crew as they try to rest in the cold, dark Lunar Module 'lifeboat'," said Saunders, a property developer in the U.K., in a statement emailed to Fox News.

APOLLO 13 ASTRONAUT FRED HAISE RECOUNTS ILL-FATED MISSION: 'WE NEVER GOT TO THE EDGE OF THE CLIFF'

Saunders recently garnered attention for his hi-def images of Apollo 11 astronauts Neil Armstrong and Buzz Aldrin. Again, he used NASA images to create a panoramic view of the Apollo 13 interior. “This time though, there are around 1,000 image samples in the panorama, taken from 36 separate frames of the 16mm 'movie' footage, aligned, stacked, processed, and layered/merged into an image,” he said.

The panoramic hi-def image of interior of the Apollo 13 Lunar Module. Astronaut Fred Haise (right) is napping, while Jack Swigert can be seen curled up in the storage area. Commander Jim Lovell's hand can be seen in the left of the picture. (NASA/Andy Saunders)

In an interview last year, Haise recounted the incredible events that occurred during the mission 50 years ago.

The mission, which has been described as a “successful failure” was a triumph of improvisation. On its website, NASA notes that the removal of carbon dioxide from the Lunar Module was a major concern as the stricken spacecraft made its way back to Earth. “There were enough lithium hydroxide canisters, which remove carbon dioxide from the spacecraft, but the square canisters from the command module were not compatible with the round openings in the lunar module environmental system,” it explains.

There were four cartridges from the lunar module and four from crew backpacks. However, the lunar module was required to support two men for two days but now had to support three men for about four days. “After a day and a half in the LM, a warning light showed that the carbon dioxide had built up to a dangerous level,” NASA explains on its website. “Mission control devised a way to attach the CM canisters to the LM system by using plastic bags, cardboard and to tape all materials carried on board.”

This can be seen in the high-def image. “We can see some great detail in the Lunar Module itself which was used as a 'lifeboat' including the 'square peg in round hole', cobbled together CO2 filter,” Saunders said. “Also, Fred Haise (right), Jack Swigert (curled up in the storage area) and Jim Lovell's hand (he's behind the camera).”

As the world attempts to contain the coronavirus pandemic and millions of people self-isolate across the globe, Saunders said that the image of the Apollo 13 crew in space is particularly resonant.

“It's interesting, as we all get to grips with the difficulties of social distancing/self-isolation - we can better imagine the crew in the ultimate isolation; 200,000 miles from earth in something the size of a family car and actually running short of vital supplies including water and breathable air!” he said.

To commemorate the Apollo 13 50th anniversary, a stunning NASA video has also recreated the mission’s trip around the moon using images captured by the space agency’s Lunar Reconnaissance Orbiter.