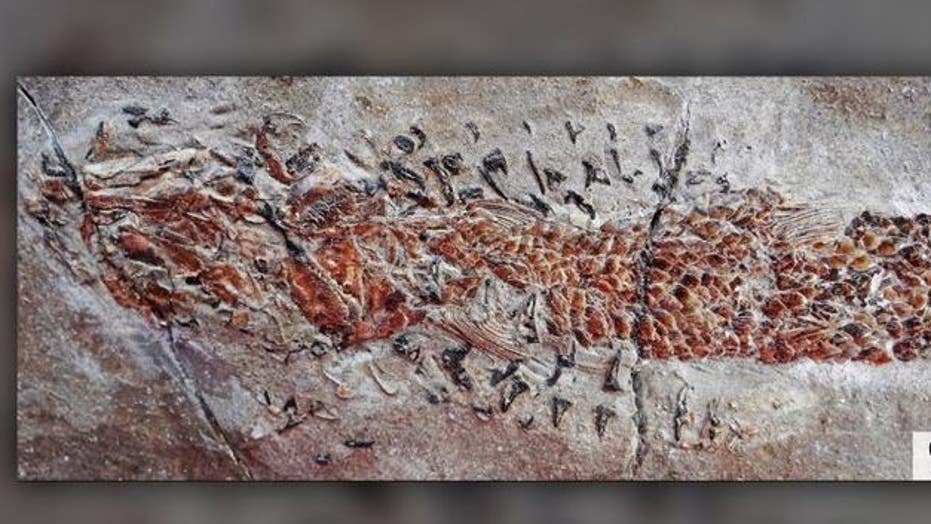 At one time, a bizarre squid-like creature had arms covered in hooks that enabled it to attack and completely crush the skull of its prey, according to researchers.

A 200-million-year-old fossil depicting the violent attack was found at the Dorset and East Devon Coast, a UNESCO World Heritage site on the southern coast of New England.

Malcolm Hart, emeritus professor of micropaleontology at the University of Plymouth in England and the study's lead researcher, explained that the attack was horrific.

"The head [of the fish] has been bitten through; the bones have got sharp edges where they've literally been crushed and broken," Hart told Live Science. "So this thing probably attacked the fish quite violently -- the bones in the head of the fish are just literally smashed."

The study was presented for publication in the journal Proceedings of the Geologists' Association.

A magnified image showing the damaged head and body of the fish, with the arms of the squid-like creature clamped around it. (Malcolm Hart/Proceedings of the Geologists' Association)

Hart was able to examine the fossil when it was on exhibit last year at the Lyme Regis Museum in England.

His photographs magnify the details of the predator, an extinct squid relative known as a belemnoid, which had hardened hooks covering its 10 arms -- like something out of a horror movie.

Most modern squids have eight "regular" arms and two elongated ones, said Michael Vecchione, an invertebrate zoologist at the Smithsonian's National Museum of Natural History in Washington, D.C., who was not involved with the study.

"In some squids, those suckers develop into hooks," Vecchione told Live Science. "But they're not like the hooks that are in the belemnoids. They probably function very similarly -- they're used to grab hold of soft things that you can't grab hold of with a sucker."