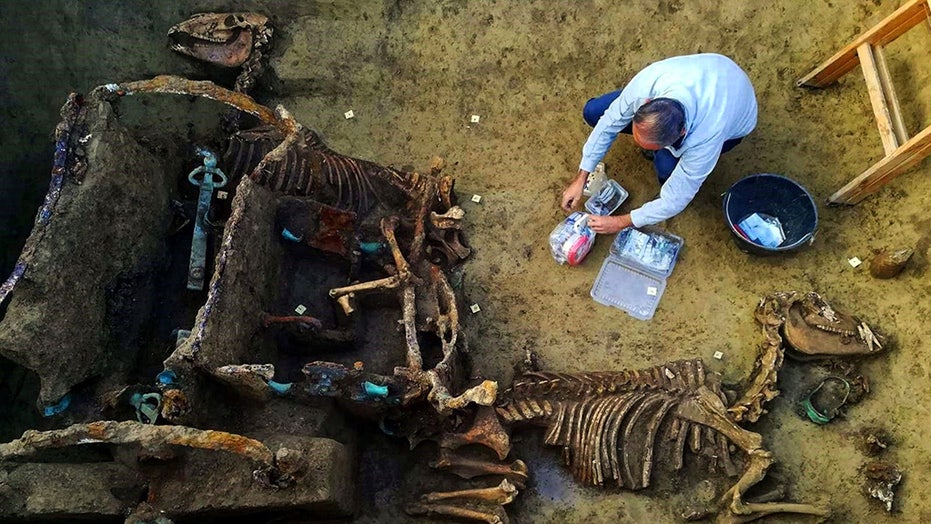 Archaeologists have discovered the fossilized remains of a chariot from Ancient Rome along with two horses, likely from an "extremely wealthy family."

The discovery, estimated to be approximately 1,800 years old, was made in Croatia by archaeologists from the City Museum Vinkovci and Institute of Archaeology in Zagreb, Croatia, according to Croatian news outlet, Novosti.hr.

Curator Boris Kratofil told local media that the discovery stems from an ancient burial tradition, where burial was made under a mound known as tumuli, a practice associated with wealth.

The remains found near the city of Vinkovci in Croatia; These images show the incredible discovery of a Roman chariot complete with the fossilized remains of horses that archaeologists have found as part of a burial ritual for “extremely wealthy families”. (Credit: CEN)

"The custom is associated with extremely wealthy families who have played a prominent role in the administrative, social and economic life of the province of Pannonia," Kratofil said in comments obtained by the Daily Mail.

Institute of Archaeology director Marko Dizdar said the discovery was unique to Croatia, but a remarkable find nonetheless.

"In a few years we will know a little more about the family whose members were buried in this area 1,800 years ago," Dizdar said, according to the Mail. "We are more interested in the horses themselves, that is, whether they were bred here or came from other parts of the empire, which will tell us more about the importance and wealth of this family."

Ancient Rome continues to reveal its secrets. Researchers, for example, recently discovered an ancient fast-food joint in the ruins of Pompeii near Naples.

Last year, experts uncovered a scrawled piece of text on a wall in Pompeii that is rewriting the history of the famous ancient eruption of Mount Vesuvius.

Earlier this month, a pair of 2,000-year-old scrolls believed to have belonged to the family of Julius Caesar were virtually "unwrapped" for the first time.