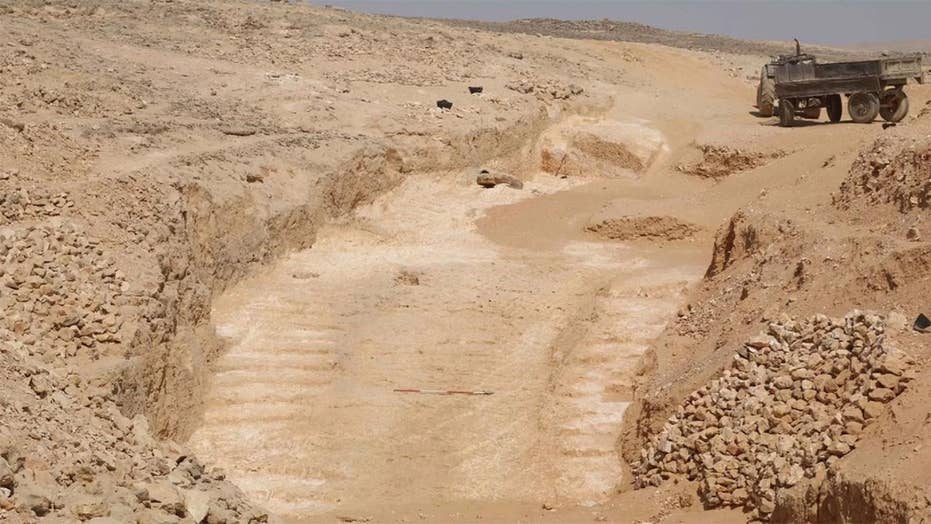 Archaeologists for the French Institute for Oriental Archeology have discovered a ramp used to build the Great Pyramid of Giza.

Archaeologists may have solved one of the greatest mysteries of modern times — they believe they may have discovered how the Great Pyramid of Giza was constructed, 4,500 years ago in Ancient Egpyt.

According to LiveScience, archaeologists may have unearthed the system responsible for pulling the stones up a slope at Hatnub, an ancient alabaster quarry. The system may have been used to transport these stones, according to the archaeologists at French Institute for Oriental Archaeology. And it may have been used to build the Great Pyramid, which is comprised of 2.3 million limestone and granite blocks, the average of which weighs 2.5 tons.

"This system is composed of a central ramp flanked by two staircases with numerous post holes," Yannis Gourdon, co-director of the joint mission told LiveScience. "Using a sled which carried a stone block and was attached with ropes to these wooden posts, ancient Egyptians were able to pull up the alabaster blocks out of the quarry on very steep slopes of 20 percent or more."

MYSTERIOUS 'KEEPER OF THE SECRET'  TOMB FOUND IN EGYPT

In September 2017, researchers found evidence that the limestone used to create the Great Pyramid may have been transported by boat.

The ropes were attached to the sled and allowed for an easier trip up the ramp, letting the people carrying the heavy slabs in an easier manner, Roland Enmarch, the other co-director of the Hatnub mission, told the news outlet.

"This kind of system has never been discovered anywhere else," Gourdon added. "The study of the tool marks and the presence of two [of] Khufu's inscriptions led us to the conclusion that this system dates back at least to Khufu's reign, the builder of the Great Pyramid in Giza."

"As this system dates back at least to Khufu's reign, that means that during the time of Khufu, ancient Egyptians knew how to move huge blocks of stone using very steep slopes. Therefore, they could have used it for the construction [of] his pyramid," Gourdon said.

At 481 feet tall, the Great Pyramid is the largest of the three pyramids at Giza. It was built for the pharaoh Khufu, while the other two pyramids were built for pharaohs Khafre and Menkaure, respectively. It's unknown how long it took to build, but researchers believe it was done over a 10 or 20-year period, concluding around 2,560 B.C.

Ancient Egypt continues to reveal its secrets, including a "massive" building that was once part of Egypt’s ancient capital city.

Experts discovered the building, which measures 56 feet by 48 feet, in the town of Mit Rahina, 12 miles south of Cairo. Mostafa Waziri, secretary general of the Supreme Council of Antiquities, says the building is likely part of the residential block in the ancient Egyptian capital of Memphis.

Archaeologists also recently unearthed an ancient Egyptian tomb, dating back more than 4,000 years, that belongs to a priest named Kaires, the "sole friend" of an Egyptian pharaoh yet to be determined. Kaires is described as "the steward of the royal palace" and the "keeper of the secret of the Morning House."

The tomb was discovered in a burial site near a pyramid at Abusir, according to LiveScience.