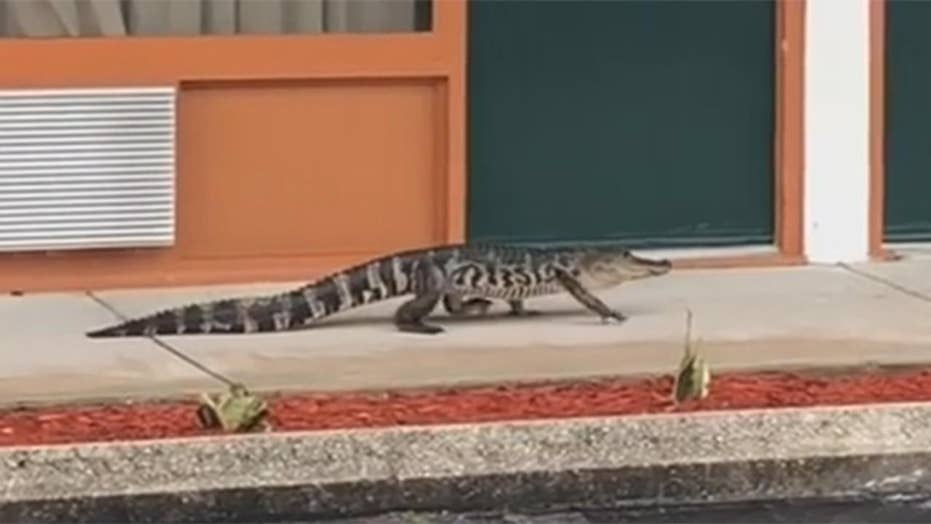 Raw video: Deputies called to Quality Inn in Sebring, Florida after an alligator was seen walking about; licensed trapper cornered the reptile and took it away.

An alligator was caught checking out rooms at a Quality Inn motel in Sebring, Florida, over the weekend. But officials with the Highlands County Sheriff's Office say the nearly 5-foot-long creature may have just been looking for the perfect spot to day drink.

"We aren't sure if this little guy got locked out of his room at the Quality Inn in Sebring this afternoon or what," the sheriff's office joked in a post online Sunday. "Maybe he was just looking for the tiki bar to get a margatorita, but he didn't look like he was old enough to drink and didn't appear to have any ID in his alligator skin wallet."

The sheriff's office shared a 40-second video of the gator slowly making its way past a block of hotel rooms before turning a corner to head down another hall. Deputies called a licensed trapper who taped the gator's mouth shut, carried it to his truck and relocated it.

As of Monday afternoon, the video of the "partying" gator has received nearly 60,000 views and more than 1,400 shares on Facebook. Dozens of people were quick to crack jokes about the creature.

"Maybe he was just looking for the tiki bar to get a margatorita..."

"He’s getting ready for that BYOB," one user replied.

"Business as usual in Florida.." a local said.

Anyone who believes an alligator is posing a "threat to people, pets or property" should call FWC’s toll-free hotline at 866-FWC-GATOR, Snapp said.