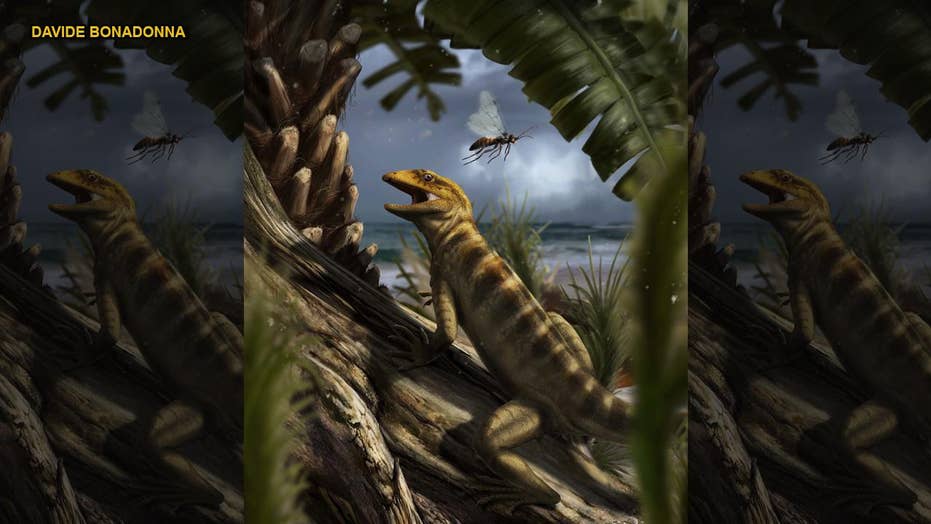 A new study in the scientific journal Nature, gives insight into a 240 million year-old fossil that was recently identified as the 'mother of all lizards,' being the direct ancestor of 10,000 current species of reptiles including lizards and snakes.

Move over Godzilla. There's a new "mother of all lizards" in town.

Known as Megachirella wachtleri, this ancient lizard is the direct ancestor of 10,000 current species of reptiles (including lizards and snakes). The lizard is also thought to be 75 million years older than the earliest known squamates and responsible for bridging the gap between the oldest known lizards and the origins of the group, according to a new study in the scientific journal Nature.

Squamates are reptiles of the larger order Squamata and include snakes, lizards and amphisbaenians.

"Megachirella provides unique insights into the early acquisition of squamatan features, as it is the first unequivocal squamate from the Triassic," the study reads.

The fossil was found in the Alps in northern Italy in 2003, but recent scans revealed features in it that date to approximately 240 million years ago, making it much more important than initially thought.

Speaking with Live Science, lead study author Tiago Simões, a doctoral candidate in biological sciences at the University of Alberta in Edmonton, said the lizard needed further attention to determine its significance.

Scientists found a preserved specimen of Megachirella wachtleri in northern Italy and described it in 2003. (MUSE Science Museum)

"It deserved further attention — especially in the form of CT [computed tomography] scanning — to provide greater anatomical details and an improved data set, to understand its placement in the evolutionary tree of reptiles," Simões told the trade website in an email.

Simões looked carefully at several datasets from over 50 museums to fully understand what he was looking at, helping him "to conduct the phylogenetic analysis presented in this study," he told AFP.

Simões, along with Michael Caldwell, one of the study's co-authors, also likened the fossil to "a virtual Rosetta Stone in terms of the information it gives us on the evolution of snakes and lizards."

Simões and his team of researchers used CT scans to build 3-D models of the fossil and found several features linking Megachirella to other squamates, including part of the braincase and the structure of its collarbone.

"Our results reshape the diapsid phylogeny and present evidence that M. wachtleri is the oldest known stem squamate," the study reads. "Megachirella is 75 million years older than the previously known oldest squamate fossils, partially filling the fossil gap in the origin of lizards, and indicates a more gradual acquisition of squamatan features in diapsid evolution than previously thought."

The researchers also noted that for the first time, "orphological and molecular data are in agreement regarding early squamate evolution, with geckoes — and not iguanians — as the earliest crown clade squamates."

Given the large gap between Megachirella and other squamates that lived 168 million years ago, there is significant work to be done to understand what ancient lizards and snakes looked like.

"What we are discovering is the tip of the iceberg," Simões told Live Science. "And much further work needs to be done to understand the early evolution of squamates."