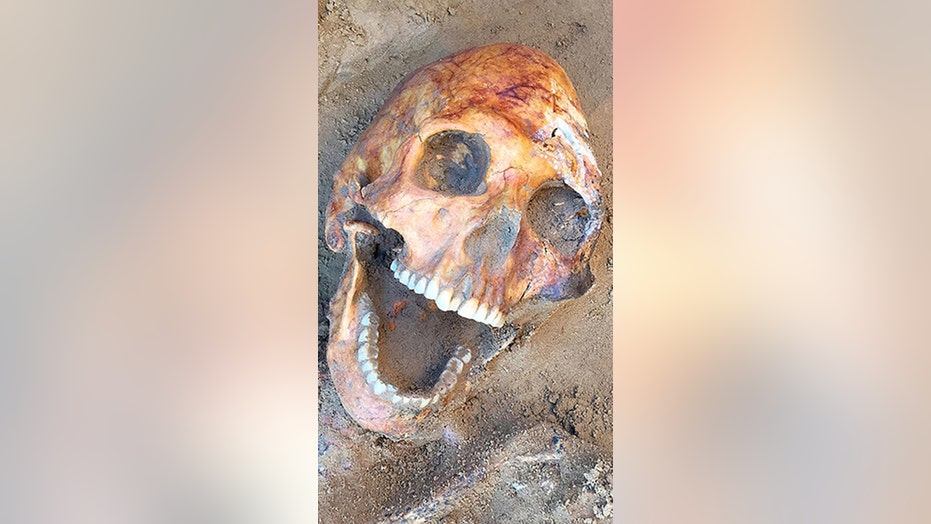 A farmer digging on his land in Russia discovered something unexpected: a 2,000-year-old burial mound containing the remains and artifacts of a nomadic royal — including a strange "laughing" man skull.

The trove of amazing jewelry, weapons and other artifacts was found by farmer Rustam Mudayev in a grave near the Caspian Sea, according to The Daily Mail.

Mudayev consulted with the Astrakhan History Museum, which eventually organized an expedition to the village where the remains were found.

"After inspecting the burial site we understood that it to be a royal mound, one of the sites where ancient nomads buried their nobility," the museum's scientific researcher, Georgy Stukalov, told the British news site.

According to the museum, which has been leading a dig at the site for two weeks, it's believed the burial belongs to a leader of a Sarmatian nomadic tribe.

A skeleton uncovered by researchers in Russia. (East2West) (East2West)

Excavators reportedly found the male skeleton inside a wooden coffin with a collection of knives, a small mirror and various pots, as well as beautiful gold jewelry decorated with turquoise and lapis lazuli.

Treasures uncovered by a farmer in southern Russia. (East2West)

The burial mound also contained other remains, including the skeleton of a young man with an artificially deformed, egg-shaped skull that was likely "molded" in some way during infancy.

The practice of shaping the skull was fairly typical among several ancient tribes.

These deformed heads were often viewed as a marker of a person's special status and noble roots.