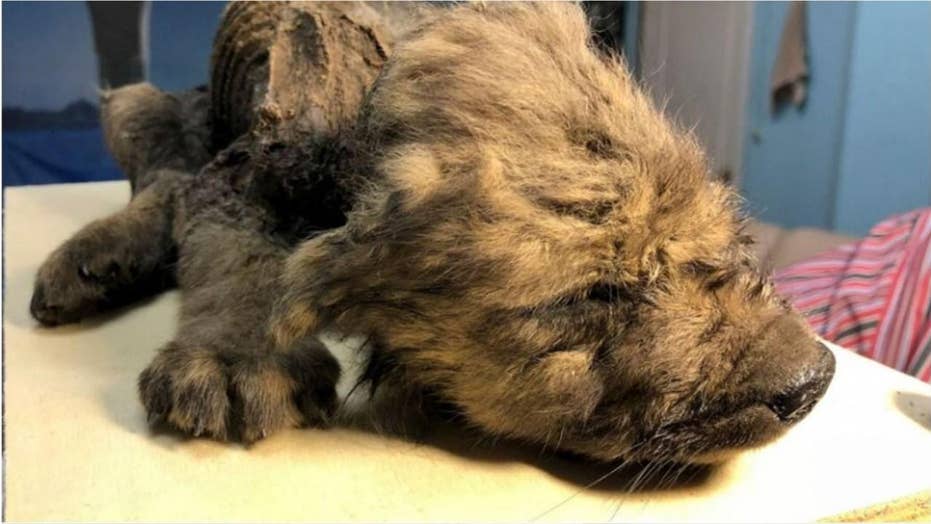 Scientists made a priceless discovery when they found a frozen lump of mud in Russia's far east region. The team believes they found the remains of an 18,000-year-old canine in permafrost.

YAKUTSK, Russia (AP) — Russian scientists on Monday showed off a prehistoric puppy, believed to be 18,000 years old, found in permafrost in the country’s Far East.

Discovered last year in a lump of frozen mud near the city of Yakutsk, the puppy is unusually well-preserved, with its hair, teeth, whiskers and eyelashes still intact.

“This puppy has all its limbs, pelage – fur, even whiskers. The nose is visible. There are teeth. We can determine due to some data that it is a male,” Nikolai Androsov, director of the Northern World private museum where the remains are stored, said at the presentation at the Yakutsk’s Mammoth Museum which specializes in ancient specimens.

In recent years, Russia’s Far East has provided many riches for scientists studying the remains of ancient animals. As the permafrost melts, affected by climate change, more and more parts of woolly mammoths, canines and other prehistoric animals are being discovered. Often it is mammoth tusk hunters who discover them.

“Why has Yakutia come through a real spate of such unique findings over the last decade? First, it’s global warming. It really exists, we feel it, and local people feel it strongly. Winter comes later, spring comes earlier,” Sergei Fyodorov, scientist with the North Eastern Federal University, told The Associated Press.

“And the second very serious, deep reason, of why there a lot of finds is the very high price of mammoth tusk in the Chinese market.”

When the puppy was discovered, scientists from the Stockholm-based Center for Palaeogenetics took a piece of bone to study its DNA.

“The first step was of course to send the sample to radio carbon dating to see how old it was and when we got the results back it turned out that it was roughly 18,000 years old,” Love Dalén, professor of evolutionary genetics at the center, said in an online interview.

Further tests, however, left the scientists with more questions than answers — they couldn’t definitively tell whether it was a dog or a wolf.

“We have now generated a nearly complete genome sequence from it and normally when you have a two-fold coverage genome, which is what we have, you should be able to relatively easily say whether it’s a dog or a wolf, but we still can’t say and that makes it even more interesting,” Dalén said.

He added that the scientists are about to do a third round of genome sequencing, which might solve the mystery.