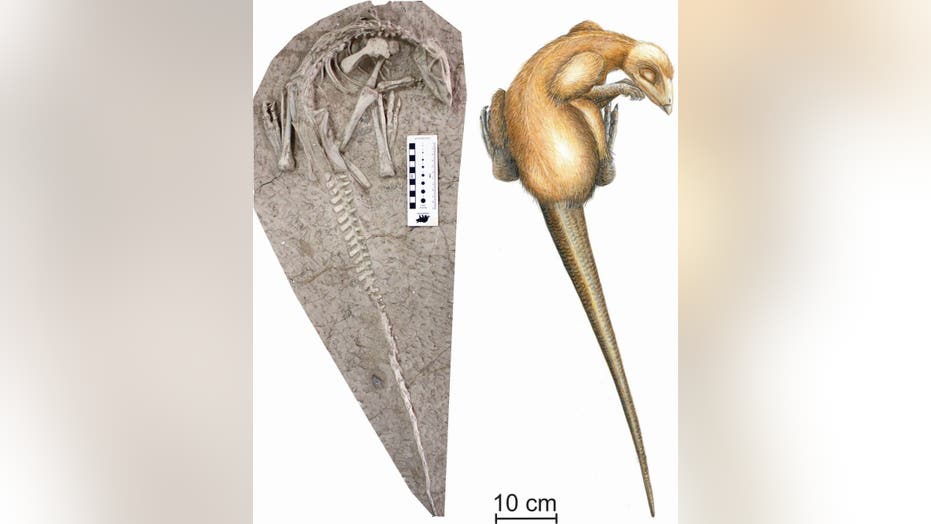 Researchers have discovered 125-million-year-old dinosaur fossils that are perfectly preserved and suggest the creatures were trapped by a volcanic eruption.

The study, published in the scientific journal PeerJ, notes the species were discovered in the western Liaoning Province in China and have been named Changmiania liaoningensis, which means "eternal sleeper from Liaoning" in Chinese.

"These animals were quickly covered by fine sediment while they were still alive or just after their death," said the study's co-author and paleontologist Pascal Godefroit, in a statement.

One of the two perfectly preserved skeletons of Changmiania liaoningensis and an artist's impression. (Drawing: Carine Ciselet)

LARGEST DINOSAUR EVER HAD 'RHINO-LIKE HORN' AT BIRTH, RESEARCH REVEALS

C. liaoningensis was small compared to its larger herbivore brethren, such as the titanosaur. It was approximately 4-feet long and had "very powerful hind legs" to go with a long tail, which suggests the ancient ornithopod was a strong and fast runner and walked upright, similar to iguanodons.

“However, certain characteristics of the skeleton suggest that Changmiania could dig burrows, much like rabbits do today,” Godefroit added. “Its neck and forearms are very short but robust, its shoulder blades are characteristic of burrowing vertebrates and the top of its snout is shaped like a shovel. So we believe that both Changmiania specimens were trapped by the volcanic eruption when they were resting at the bottom of their burrows 125 million years ago.”

As for their perfect preservation, the researchers suggest the two dinosaurs were resting when they died.

"It is tentatively hypothesized that both Changmiania liaoningensis specimens were suddenly entrapped in a collapsed underground burrow while they were resting, which would explain their perfect lifelike postures and the complete absence of weathering and scavenging traces," they wrote in the study's abstract.

The area where the fossils were found, the Lujiatun Beds, are the oldest layers of the famous Yixian Formation. For more than a generation, researchers have discovered "several hundred" fossils of feathered dinosaurs in the region.

Researchers continue to learn more about the migration patterns and habits of dinosaurs. In March, a study was published that looked at the fossilized teeth of a hadrosaur and concluded that its journeys were short, roughly 50 miles.

In April 2019, a study was published that said duck-billed dinosaurs roamed the Arctic 69 million years ago.

Dinosaurs were wiped out 65 million years ago by an asteroid that hit Earth in what is now the Yucatan Peninsula in Mexico.