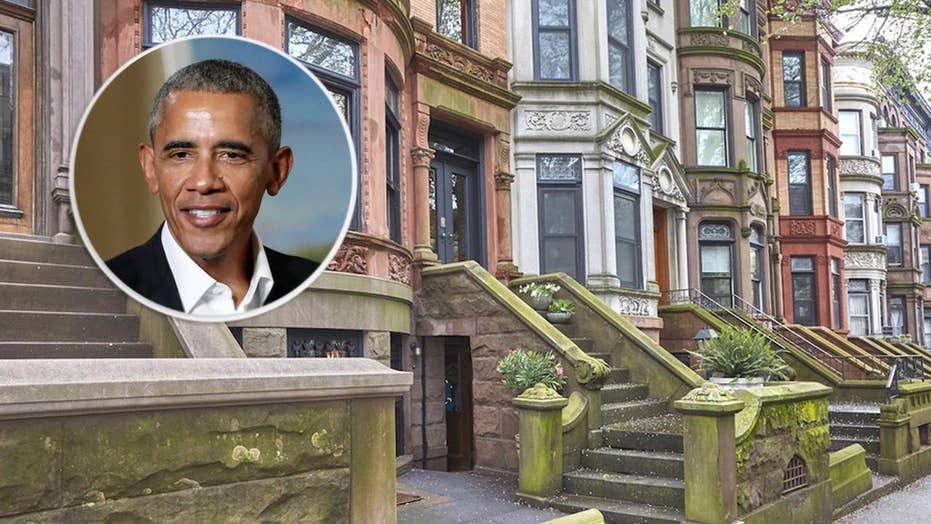 Hot Houses: Peek inside the president's former pied-à-terre, as well as a two-floor 'mansion in the sky' and an apartment within an Italian palace

This week we have an incredible apartment inside a Roman palace, a London penthouse and a Brooklyn townhouse once occupied by former president Barack Obama.

First up this week we have an apartment fit for royalty, nestled right in the heart of an Italian palace in Rome.

The 4,305-square-foot apartment spans an entire floor. You could easily get lost in its four bedrooms, five bathrooms, living room, dining room, and kitchen.

The home’s interior was designed to complement its stunning historic setting inside the Mareghi palace which was constructed in 1870.

Filled with old world charm, the living room is decorated with stained-glass windows that overlook Via di Fontanella Borghese.

In the main bathroom, the walls, bathtub, and sink were made by a local artisan and the floors are a stunning black and white marble.

The home has been fully renovated and updated with stainless steel appliances and smart home automation.

If you’re in the market for something a little pricier, a duplex penthouse in the tallest residential tower in London’s West End is accepting offers in the $70 million range.

This mansion in the sky includes five bedrooms with en-suite bathrooms, a reception area, a kitchen, a study, and living and dining rooms with 16-foot ceilings.

The apartment is equipped with all modern technologies, including Crestron lighting, audio-visual, temperature and security control systems.

Through the floor-to-ceiling windows and its 1,688-square-foot wraparound terrace, the penthouse boasts unobstructed panoramic views of London landmarks, including Buckingham Palace.

The 82-unit building also offers a 98-foot swimming pool, a spa, a gym and a screening room.

Finally, we have a little slice of modern history. If you’re still feeling a little nostalgic for the Obama years, this purchase might help ease your separation anxiety.

The townhouse in Brooklyn where former President Barack Obama lived after he graduated from Columbia University in the eighties is currently on sale for $4.29 million.

Obama only occupied the top floor of the stately property that was built around the turn of the 20th century.

The townhouse has easy access to Prospect Park, Grand Army Plaza and shopping and dining amenities.