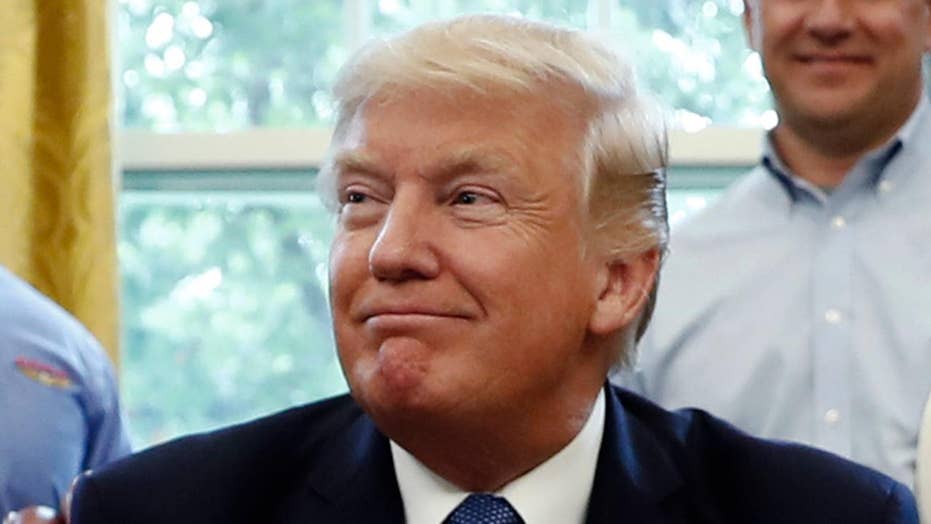 Trump on 'calm before the storm' comment: 'You'll find out'

The White House remained coy Friday about what President Trump meant when he called a gathering of military advisers the “calm before the storm,” with the president winking and declining to elaborate when pressed by a reporter.

“You’ll find out,” the president responded.

“We’re never going to say in advance what the president’s going to do,” Sanders said, adding: “You’ll have to wait and see.”

On Thursday evening, reporters were led hastily to the State Dining Room, where they walked into a scene of the president, his highest-ranking military advisers and their wives posing for a group photo.

Earlier Friday, the president wouldn't reveal what he meant about his comment as he signed a manufacturing proclamation in the Oval Office. He winked when a reporter asked him to clarify, saying "You'll find out."

During the briefing, Sanders suggested the president wasn’t discussing a specific situation, amid tensions around the globe with ISIS, North Korea and Iran.

“I believe it was just a general comment. I’m not aware of anything specific that was in reference to.”

She added, “I think you can take the president protecting the American people always extremely serious. He’s been very clear that that’s his number one priority. And if he feels that action is necessary, he’ll take it.”

Multiple outlets have reported that the White House next week will effectively scrap the Iran nuclear deal signed by the Obama administration in 2015, kick-starting a new standoff between Iran and the U.S.

Trump, who earlier said Iran had “not lived up to the spirit" of the nuclear deal, was expected to “decertify” and denounce the controversial accord as not being in the U.S. national interest, passing the issue to Congress.

At the same time, North Korea continues to develop its nuclear program, posing a threat to its immediate neighbors -- and to the U.S., which it has tormented with defiant rhetoric. Trump recently threatened to “totally destroy” the rogue country if it attacks the U.S. or its allies.

At the Thursday meeting, Trump reiterated his administration’s opposition to North Korean leader Kim Jong Un, saying the U.S. would not “allow this dictatorship to threaten our nation or allies with unimaginable loss of life.”

He also pledged to “do what we must do to prevent that from happening and it will be done, if necessary. Believe me."