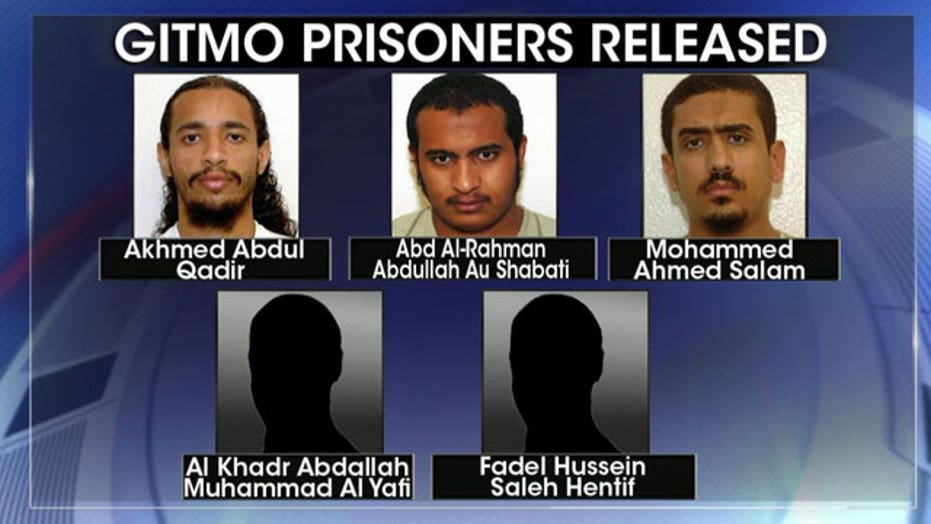 The Department of Defense announced Wednesday that five Yemeni terror suspects held at Guantanamo Bay have been released. But despite concerns from lawmakers about the risks of sending anybody back to Yemen, four were released to Oman -- which is right next door.

Yemen is back in the spotlight in the wake of the Paris terror attacks. One of the suspects traveled there in 2011 and met with the radical American cleric Anwar al-Awlaki. Al Qaeda in the Arabian Peninsula, based in the region, claimed responsibility for the attacks.

Though the administration technically has lifted a ban on sending Guantanamo detainees to Yemen, the U.S. traditionally has balked at repatriating prisoners back to the country, where the government is battling the Al Qaeda insurgency.

The fifth, Akhmed Abdul Qadir, was transferred to Estonia. This marks the first time either country has accepted former Guantanamo prisoners for resettlement.

In a statement, the Defense Department said the transfers were "unanimously approved" by all agencies responsible for reviewing them.

"The United States coordinated with the Government of Oman to ensure these transfers took place consistent with appropriate security and humane treatment measures," the DOD said.

The bill would prohibit transfers of terror suspects to foreign countries if there has been a confirmed case where an individual was transferred from Guantanamo and engaged in any terrorist activity. Any transfers to Yemen would be shut down for two years.

"It's clear that we need a time out," she said.

The newly transferred prisoners had been held for more than a dozen years. The men had been cleared for release since at least 2009.

All five were captured in Pakistan and detained by the U.S. as suspected Al Qaeda fighters. U.S. officials later determined it was no longer necessary to detain them but have struggled to find other countries willing to take them in. The men are all in their 30s and 40s, including one who was 17 when he was sent to Guantanamo.

The release of the five brings the number of detainees at Guantanamo Bay down to 122.

The Defense Department stresses that most detainees released under this administration "live quietly" in locations around the world. Asked about the latest transfers to Oman, a Defense spokesman said such a decision is only made after "detailed, specific conversations with the receiving country about the potential threat a detainee may pose after transfer and the measures the receiving country will take in order to sufficiently mitigate that threat.

"If we do not receive adequate security and humane treatment assurances, the transfer does not occur," the spokesman said.

Obama has pushed to close the detention facility since his inauguration in 2009. However, opponents say that Guantanamo is the best location for terror suspects since the Sept. 11, 2001, attacks.

"Now is not the time to be emptying Guantanamo," Ayotte said at a news conference hours before the latest transfers were announced, during which she warned of fresh terrorist threats.

The administration has been steadily transferring detainees cleared for movement to other countries. Five men who were held for a dozen years without charge at Guantanamo were sent to the Central Asian nation of Kazakhstan for resettlement in late December.

Nearly 30 prisoners were resettled in third countries last year as part of Obama's renewed push to close the detention center.

"We are committed to closing the detention facility. That's our goal and we are working toward that goal," said Ian Moss, a spokesman for the U.S. State Department on Guantanamo issues.