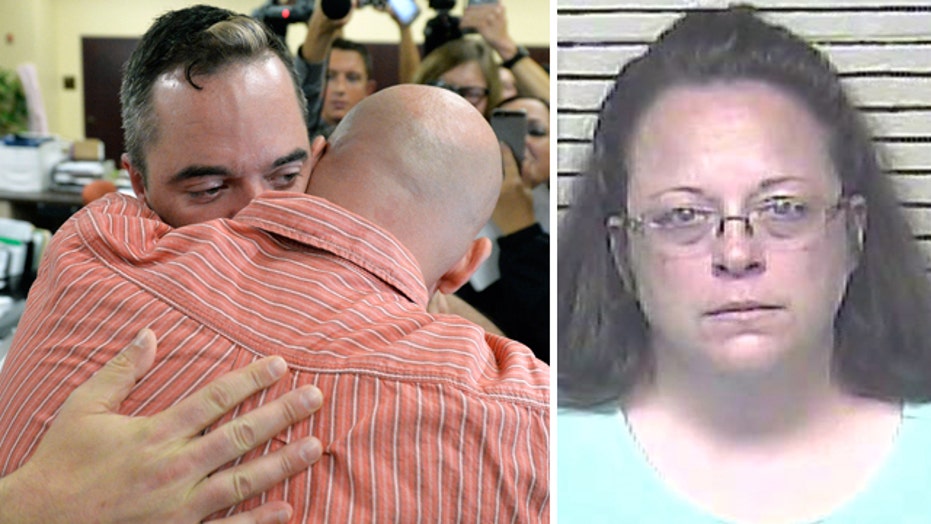 Gay couple gets marriage license in Ky. with clerk jailed

At least three gay couples received marriage licenses Friday in Rowan County, embracing and celebrating as the defiant clerk sat remained jailed because she refuses to issue the licenses or allow her deputies to hand them out.

William Smith Jr. and James Yates, a couple for nearly a decade, were the first to receive a marriage license in Rowan County. Deputy clerk Brian Mason issued the license, congratulating the couple and shaking their hands as he smiled. After they paid the license fee of $35.50, Yates rushed across the steps of the courthouse to hug his mom as both cried.

"This means at least for this area that civil rights are civil rights and they are not subject to belief," said Yates, who had been denied a license five times previously.

A crowd of supporters cheered as the couple left, while a street preacher rained down words of condemnation. Yates and Smith said they are trying to choose between two wedding dates and plan a small ceremony at the home of Yates' parents.

The licenses were issued only after five of Kim Davis' deputy clerks agreed to hand them out, the lone holdout from the office being her son, Nathan Davis. Her office was dark Friday morning, with a sheriff's deputy standing guard in front of it.

"I just want the licenses given out. I don't want her in jail. No one wanted her in jail," Yates said.
A second couple, Timothy and Michael Long, also were issued a license about an hour after Yates and Smith. When the couple got inside the office, a man harassed them and said, "More sodomites getting married?" The Longs did not respond, and a worker told the man to leave.

"Now we can breathe. I'm still ecstatic and happy. I just can't wait to get married now," Roberts said.

During a hearing Thursday, U.S. District Judge David Bunning had offered to release Davis if she promised not to interfere with her employees issuing licenses, but she refused, citing her Christian beliefs.

Speaking to reporters Friday morning, Davis' husband, Joe Davis, held a sign saying "Welcome to Sodom and Gomorrah" and said his wife was in good spirits after her first night in jail.

When asked if she would resign, he said, "Oh, God no. She's not going to resign at all. It's a matter of telling Bunning he ain't the boss."

Kim Davis and Joe Davis still support her employees, whom he called "good people" and "good workers." He said he ate with the other deputy clerks on Thursday at an Applebee's restaurant and told them "I loved them and I was proud of them."

Davis' son supported his mother and was warned by the judge Thursday not to interfere with his fellow employees. The judge said he did not want "any shenanigans," like the staff closing the office for computer upgrades as they did briefly last week.

"That would show a level of disrespect for the court's order," Bunning said. He added: "I'm hoping that cooler heads will prevail."

The marriage licenses in the county usually have Davis' signature on them, but the ones handed out Friday did not have any signature. The county attorney and lawyers for the gay couples said they are legal and valid despite the lack of a signature.

Bunning was asked during Thursday's hearing about the licenses if Davis refused to authorize them, and he said it was up to the gay couples to take that chance.

The judge indicated Kim Davis would remain in jail at least a week, saying he would revisit his decision after the deputy clerks have had time to comply with his order. Her attorneys planned a news conference later Friday.

Republican presidential candidate Mike Huckabee said he would visit Davis in jail next week and planned a rally to support her.

Davis said she hopes the Legislature will change Kentucky laws to find some way for her to keep her job while following her conscience. But Democratic Gov. Steve Beshear again refused to call a special session of the legislature on Thursday. State lawmakers will not meet until January.

Davis, an Apostolic Christian, wept during her testimony in federal court Thursday, telling the judge she was "always a good person" but that she gave her heart to the Lord in 2011 and "promised to love Him with all my heart, mind and soul because I wanted to make heaven my home."

"God's moral law conflicts with my job duties," Davis told the judge before she was taken away by a U.S. marshal. "You can't be separated from something that's in your heart and in your soul."