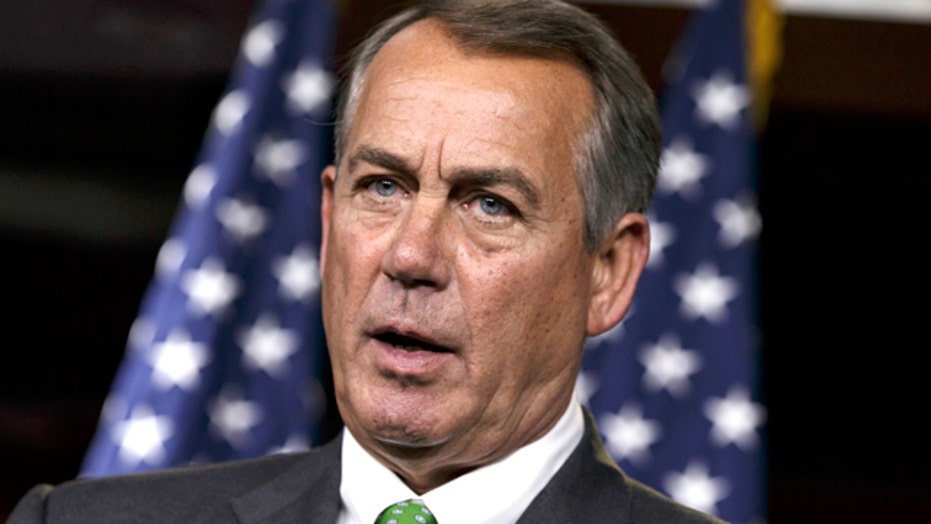 Congressional Republicans, buoyed by the president’s unpopularity, aren’t just looking to keep control of the House this year. They want to build a historic majority, the likes of which haven’t been seen since the end of World War II.

GOP leaders for months have been pushing what they call their “Drive to 245” – an ambitious plan to bring their numbers in the House to 245 seats. To get there, the party would have to win a net 11 seats.

By most accounts, the odds lean against the party hitting that historic goal; the GOP would need to execute a near-flawless performance on Election Day. But political observers aren’t ruling anything out.

“I think the Republicans winning 11 [new seats] is a possibility. It’s not a likely scenario, but I don’t think you can dismiss it entirely,” said Nathan Gonzalez, managing editor of The Rothenberg Political Report.

Republicans, with 234 seats (or 233, when ex-GOP leader Eric Cantor's resignation is factored in, though that seat is considered safe), are increasingly confident they’ll at least hold onto the House.

Hitting 245 amounts to bragging rights more than anything – as it would give the GOP an advantage over Democrats not seen since the Democratic Truman administration, when Republicans had 246 members following the 1946 elections. To be sure, Republicans the last two sessions have enjoyed a majority not seen in decades. But hitting 245 would put them right up against that Truman-era mark.

The National Republican Congressional Committee (NRCC) claims they are bearing down on the prize.

Daniel Scarpinato, NRCC spokesman, said the “Drive to 245,” which was launched with a video back in May, was an “aspirational goal” -- but is considered “ambitious but achievable, and it’s gotten people really pumped up about picking up seats in the House.”

Most analysts predict the party will pick up five to 10 seats in November. According to the widely read Cook Political Report tip sheet, 206 Republican and 161 Democratic seats are considered solidly safe. Another 23 races are likely (not considered competitive)/leaning (competitive, but slightly advantage to) Republican; 26 are likely/leaning Democratic.

Here is where it gets interesting. In the “toss-up or worse” category, only three Republicans are fighting for their political lives, where some 11 Democrats are scrambling for theirs.  In the one open race in the toss-up category, Republican David Young is desperately trying to keep the Iowa seat held by retiring Republican Rep. Tom Latham.

Democrat Staci Appel is not making it easy. She’s raised more than Young -- $1.1 million compared with $828,000 (as of the last report in June), and has spent less, with $750,000 on hand compared with the $87,000 he had back in June. Meanwhile, both the NRCC and Democratic Congressional Campaign Committee have been pouring serious cash into the campaigns, $535,000 and $850,000 respectively, hoping to pull their candidate out of what appears to be a dead heat.

Bill Scher, online campaign manager at Campaign for America's Future, a progressive policy think tank, says there are a number of unknowns that might just end up leaving “Drive 245” in the dust.

"To pull it off, Republicans would have to win nearly all of the toss-up seats currently occupied by Democrats, plus not lose any of the handful of vulnerable Republican-held seats," he said.

One of those unknowns is turnout. Midterms are a harder environment in which to get voters to the polls. Democrats in recent elections have enjoyed the fruits of President Obama’s elaborately honed field network, maximizing both registration and get-out-the-vote efforts. But history says that Democrats are less likely than Republicans to come out to vote in midterms. The president acknowledged as much during an April fundraiser in Houston.

Republicans are counting on that, and they are also counting on the president’s low approval numbers dragging down candidates on the more vulnerable tickets. As of August, the NRCC had raised $113 million and spent $69 million on its candidates to get this message out, with $45 million on still hand.

“Americans are responding [to Republicans] because they are very unhappy with the direction this president has the taken the country. That is really driving this, and we really feel there is an opportunity here to say we need a House of Representatives that is a real check and balance on this administration,” Scarpinato said.

“Do I think they have a shot? Yes I do,” exclaimed Republican pollster Jim McLaughlin. Not only is there a “six-year itch” disadvantaging Democrats, he told FoxNews.com, “but there is a sense of incompetence and sense of weakness and stories of people being beheaded … and, the economy isn’t where people want it to be,” he added.

But while Obama’s approval numbers are in peril, Republicans still are in the pits in most national polls, Scher and others point out. Democrats don’t fare much better. In the most recent Gallup Poll, voters gave Republicans 40 percent favorable and 57 percent unfavorable ratings, compared to 42 percent favorable and 54 unfavorable for Democrats. The president, on the other hand, has a 44 percent approval rating, with 53 percent disapproving.

“This says to me that you are not seeing an ideological shift in the country -- it’s not the same as a political wave,” said Scher. “What you are seeing is general disgust that the system is not working.”

The success or failure of “Drive to 245” ultimately rests on a dozen or so close races, as well as factors like turnout. Aside from Iowa’s Third District, Republicans are defending vulnerable seats in Colorado’s Sixth District, Florida's Second, and New York’s 11th, where Republican Rep. Michael Grimm is running for re-election, despite a 20-count indictment on tax, mail and wire fraud charges and an incident where he threatened to break a reporter “in half.”

The latest reported polls have Grimm and his opponent, Democrat Domenic Recchia, running neck and neck.