President lectures Democrats for 'putting politics over country' as House lawmakers prepare to vote on a spending bill that does not fund the border wall; Mike Emanuel reports from Capitol Hill.

President Trump told House Republican leaders Thursday he will not sign a Senate-passed spending package that does not include sought-after border security funds, upending negotiations to avert a government shutdown by the end of the week.

“I’ve made my position very clear: any measure that funds the government must include border security,” the president said Thursday during a White House event.

House Speaker Paul Ryan, R-Wis., and House Majority Leader Kevin McCarthy, R-Calif., told reporters after meeting the president at the White House that Trump told them he will not sign the stopgap spending measure approved by the Senate Wednesday night because of “legitimate concerns for border security.”

“What we’re going to do is go back to the House and work with our members,” Ryan said. “We want to keep the government open but we also want to see an agreement that protects the border. We have very serious concerns about securing our border.”

Fox News has learned the House will try to amend the Senate bill with an additional $5 billion for a border wall, as sought by Trump. But it's unclear whether that would pass -- and it would face an even tougher time in the Senate, with the clock ticking before a Friday shutdown deadline.

Things are complicated by the holidays, as well as the fact that some lawmakers leaving Congress this year are already back home. The House Republican whip team is checking in with members who aren’t in town, and trying to talk anyone that isn’t a hard “no” into flying back to Washington as soon as possible, a source said.

The Senate bill, as passed, would keep several key departments of the federal government funded through February and avert a partial shutdown. The Senate measure does provide a total of $1.6 billion for border security and funds other agencies at current levels through Feb. 8 -- but does not include new wall funding.

After the White House initially indicated a willingness to consider such a short-term compromise measure, Trump faced mounting pressure from immigration-minded conservatives to dig in on his demand for $5 billion to fund a border wall, a signature campaign promise -- before Democrats take over the House in January. The president apparently did just that in his meeting with House GOP leaders, seeking more border security and wall funding.

“The president said what the Senate sent over is just kicking the can down the road,” McCarthy said. “We want to solve this problem.”

White House Press Secretary Sarah Sanders made clear Trump was renewing his demands on a border wall, saying after the meeting: “We protect nations all over the world, but Democrats are unwilling to protect our nation. We urgently need funding for border security and that includes a wall.”

Sanders earlier signaled that the compromise deal was in trouble when she put out a brief statement saying “the president does not want to go further without border security, which includes steel slats or a wall. The president is continuing to weigh his options.”

The statement came after House conservatives fumed over the stopgap measure -- and its lack of new wall funding.

“The House Republican Conference is ready to fight on the wall. Let’s get the $5B vote on the floor - today!” Rep. Mark Walker tweeted.

The conservative Republican Study Committee also called for Republicans to “stand united in calling for funding for the border wall. One of our last acts of this Congress should be fulfilling this key mandate demanded by the American people.” 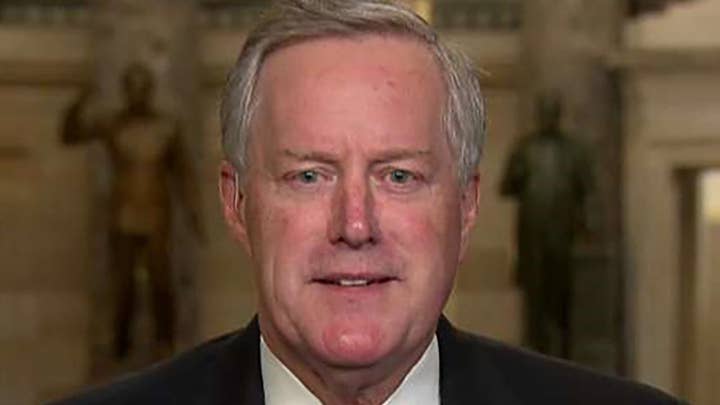 House Freedom Caucus Chair Mark Meadows, R-N.C., told Fox News late Wednesday that "the political fallout will start" soon and that Trump risks doing “major damage” to his re-election effort in 2020 if a spending deal without border funding is approved.

When asked if the president should veto any stopgap funding bill that does not include money for the border wall, Meadows replied “yes.” He added that the "mistake" Republicans had made was that "we didn’t bring up the bill last week when we had the votes."

House Republicans, meanwhile, were generally frustrated about the lack of clarity from the president. One GOP member told Fox News there was a “lack of direction, lack of message” from the White House about what they are for and against.

Republican members are worried about their political exposure if they relent after campaigning on building a wall.

“We stuck our neck out for border security,” said one senior House Republican.

Another source in the House GOP conference told Fox News that members want assurances from Trump on what he will or won’t sign before they vote on anything.

A lawmaker who was in Thursday morning's Republican conference meeting said Paul Ryan abruptly exited the meeting, telling members the president was on the phone. Moments later, he canceled what could have been his final press conference, before leaving for the White House meeting.

“This is a missed opportunity to pass full-year funding bills now," she said. "However, Democrats will be ready to fully, responsibly fund our government in January, and we will support this continuing resolution.”