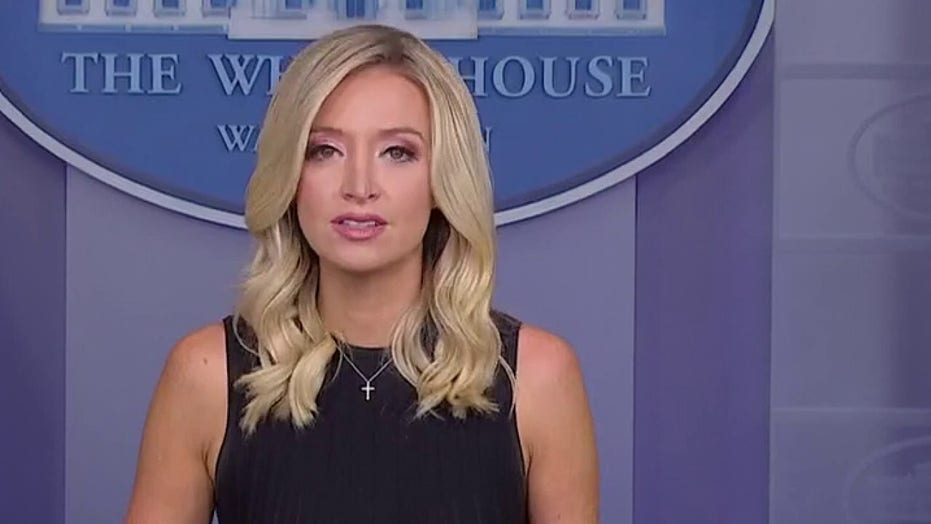 WH slams Portland Dems for anarchy, chaos: 'Trump will not give violence a pass'

White House press secretary Kayleigh McEnany slammed the “chaos and anarchy” in Portland, while blasting Democratic officials by claiming they “continue to put politics above peace.”

McEnany, during the White House press briefing on Tuesday, addressed the violence in Portland, Ore., which has experienced months of unrest following the death of Minneapolis man George Floyd in police custody in May.

“The Portland mob has become increasingly aggressive,” McEnany said, adding that “chunks of concrete, feces, balloons filled with paint, slingshots … pig feet and batteries” have been thrown at officers, while others have attempted to “barricade” law enforcement.

“The Trump administration urges state and local officials to work cooperatively to restore law and order,” she said. “President Trump is taking action in Portland, even though you have a Democrat mayor and governor unwilling to work with us.”

She added: “The bottom line is this president stands with law and order, which leads to peace, and we will not allow Portland to become the new CHOP, like we saw in Seattle.”

Over the weekend, rioters broke into the Portland Police Association building and set it on fire, as demonstrations over the death of George Floyd intensified for another night, according to Portland police.

The president has denounced the violent demonstrations in Portland and his administration has deployed federal agents, including the U.S. Marshals Special Operations Group and a U.S. Customs and Border Protection team based on the U.S.-Mexico border, to protect federal property.

Trump has insisted that federal agents are needed to protect government assets in Portland, but the city’s mayor has called on Trump to remove them.

Mayor Ted Wheeler, a Democrat, said a small group of violent activists was drowning out the message of peaceful protesters. Wheeler also said the presence of federal law enforcement in Portland was exacerbating the situation.

“Keep your troops in your own buildings, or have them leave our city,” Wheeler said Friday. “The words and actions from President Trump and the Department of Homeland Security have shown that this is an attack on our democracy.”

Meanwhile, McEnany on Tuesday was asked whether the president and the federal government’s intervention was an abuse of power.

McEnany cited 40 U.S. Code 1315, which she said “gives DHS the ability to deputize officers for duty in connection with protection of property owned or operated by the federal government.”

“When a federal courthouse is being set on fire … we don’t believe that extends past our jurisdiction,” McEnany said, calling the violence “egregious.”

“It is being depicted as a peaceful scene, but I can assure you, it’s anything but,” she said.

McEnany also was asked about a surge in violence in New York City, and said the president thinks Mayor Bill de Blasio and Gov. Andrew Cuomo, both Democrats, “should work together to take control in the streets of New York City.”

McEnany cited a “600 percent surge in violence” in the city during the briefing, while offering federal support.

“De Blasio seems to have not a hard time criticizing police officers, but an awfully hard time controlling the streets of New York City,” she said.

She went on to say that it was “up to the president” as to whether they could invoke the Insurrection Act, which was enacted in 1807 and signed into law by President Thomas Jefferson. The law allows the president to use the U.S. military to suppress rebellion within states when the need arises, according to the original document submitted to the Ninth Congress.