With just two weeks left before the Trump administration vacates Washington D.C., some staffers are resigning in protest after demonstrations breached the U.S. Capitol Wednesday by protesters following a speech by President Trump

"I was honored to serve in the Trump administration and proud of the policies we enacted. As someone who worked in the halls of Congress, I was deeply disturbed by what I saw today. I’ll be stepping down from my role, effective immediately," Matthews told Fox News Wednesday night.  "Our nation needs a peaceful transfer of power."

The White House could not be immediately reached for comment on the three women’s abrupt resignations. First lady, Melania Trump, has yet to publicly comment on losing Grisham, who served as her chief of staff. Grisham had also previously served as White House press secretary.

There was no comment from the president's Twitter feed either. The social media company temporarily disabled his account, following the violent breach of the U.S. Capitol building Wednesday. 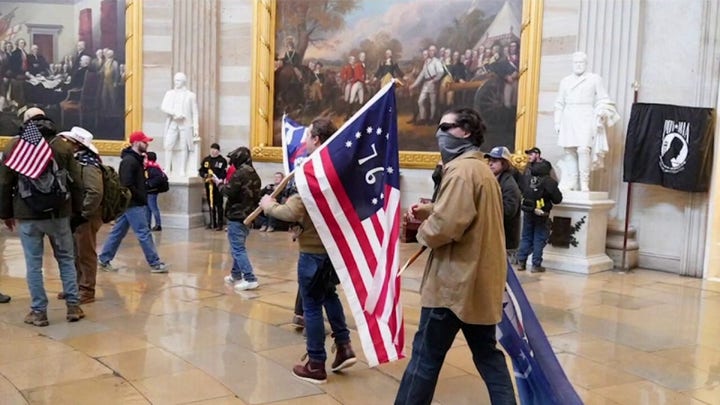 Several lawmakers have blamed the president’s rhetoric over the past several weeks for Wednesday's events. The president has repeated claims of election and voter fraud on social media and in a few public appearances.

After crowds broke into the Capitol to disrupt Congress’ certification of the Electoral College results, while Trump did tell the rioters to "go home," he also told the mob, "We love you" and "You're very special."

"These are the things and events that happen when a sacred landslide election victory is so unceremoniously & viciously stripped away from great patriots who have been badly & unfairly treated for so long," Trump said in a tweet that was later deleted.

"Go home with love & in peace. Remember this day forever!" He added.

According to the Associated Press, Twitter asked for deletion of three of Trump’s tweets, including the video where he told supporters to "go home." Trump’s account deleted those posts, Twitter said; had they remained, Twitter threatened to extend his suspension beyond the 12-hour ban.

Fox News' Jennifer Griffin and John Roberts and The Associated Press contributed to this report.