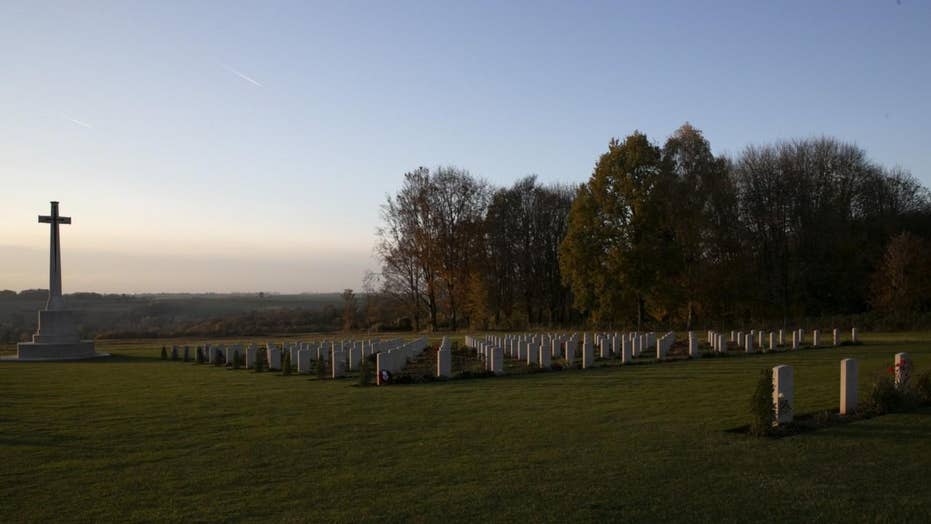 Trump cancels World War I cemetery visit due to rain

President Donald Trump is being slammed for not visiting the gravesite of World War I veterans because of weather conditions.

President Trump did not visit a World War I cemetery in northern France this weekend because his motorcade would have disrupted traffic in Paris and nearby suburbs for hours, an administration official told Fox News Sunday.

Trump was scheduled to lay a wreath and observe a moment of silence Saturday at the Aisne-Marne American Cemetery and Memorial, located approximately 60 miles northeast of Paris. However, bad weather grounded the president's helicopter and the official told Fox News there was no backup plan to travel by car.

"President Trump did not want to cause that kind of unexpected disruption to the city and its people," White House Press Secretary Sarah Sanders said in a statement. She also noted that the trip to Aisne-Marne was 2.5 hours by car.

TRUMP TAKES HEAT OVER SCRAPPED TRIP TO CEMETERY IN FRANCE

The president spent much of Saturday at the U.S. ambassador's residence following a meeting and lunch with French President Emmanuel Macron. Trump was in Paris for events to commemorate the 100th anniversary of the end of World War I.

Attending the cemetery event in Trump's place were the White House chief of staff, retired Marine Gen. John Kelly; the chairman of the Joint Chiefs of Staff, Marine Gen. Joe Dunford; and several members of the White House staff. The Battle of Belleau Wood was a critical conflict in the war and a pivotal encounter in Marine Corps history.

The determination to ground Marine One, the president's helicopter, due to bad weather is made by the Marine Corps and the White House Military Office, which then presents the recommendation to the White House in collaboration with the Secret Service, according to a Secret Service official.

Trump was criticized for not going to the cemetery by former White House officials David Frum and Ben Rhodes as well as Nicholas Soames, a grandson of former British Prime Minister Winston Churchill.

Paris was covered in clouds with drizzling rain through most of Saturday.

On Sunday, Trump attended a scheduled event honoring American war dead at a U.S. cemetery just outside of Paris.