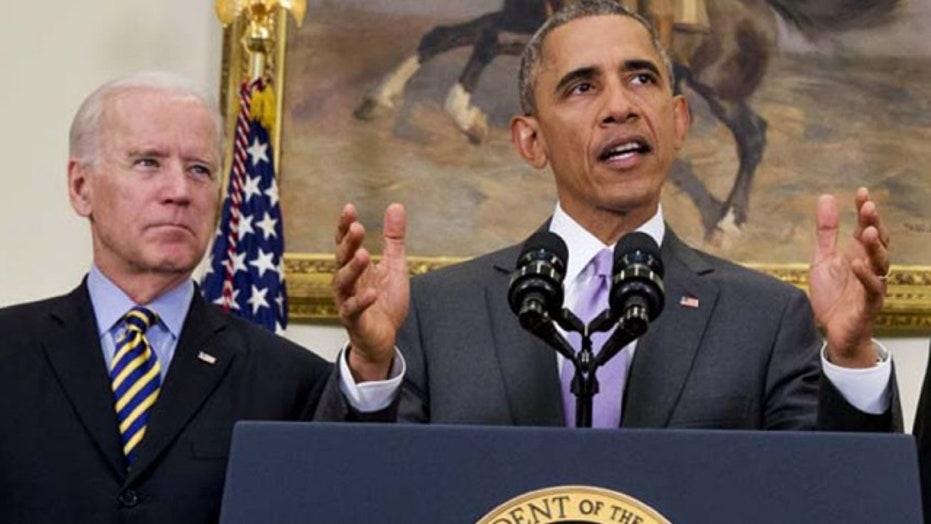 Is Obama committed to a long-term strategy to defeat ISIS?

The White House has said that President Barack Obama is open to negotiating several aspects of his proposed authorization to use military force against the ISIS terror group, including his proposed three-year time limit on U.S. military action and the use of ground troops.

According to the Associated Press, White House officials say Obama is firmly opposed to any geographic restrictions on where the U.S. military can pursue ISIS militants, who have strongholds in Iraq and Syria but have been operating across international boundaries. But they did said he is open to debate on much of the rest of his offer.

"I'm not at all going to be surprised if there are members of Congress who take a look at this legislation and decide, `Well, I think there are some things that we should tweak here, and if we do, we might be able to build some more support for,"' said White House press secretary Josh Earnest. "So I think it is fair for you to assume that this reflects a starting point in conversations."

Lawmakers are expected to consider the authorization request this week after returning from a weeklong break. Some Republicans say Obama's proposal is too restrictive for the mission to succeed. On the other side, some Democrats want more limitations on Obama's authority so the United States doesn't sign on for another open-ended war.

Obama argues he doesn't need a new authorization to pursue ISIS terrorists legally -- and he's been launching strikes against them for months based on authorizations given to President George W. Bush after the Sept. 11 terrorist attacks. But critics say Obama's use of those authorizations is a stretch at best, and the White House has taken a new position that makes it clear it doesn't see reliance on that authority as ideal, either. White House officials spoke on condition of anonymity because they were not authorized to discuss the negotiations on the record.

The White House now says if a new authorization is signed into law, Obama will no longer rely on the authority approved in 2001 to pursue the ISIS group and instead solely rely on the new powers. A White House official said Congress could make that clear within the statute by adding that limitation to the authorization. The official said if they do not add such language but still pass a new authorization, Obama will consider it his sole basis for operations against the militant group.

The change would prevent any future president from interpreting the law the way Obama has since last year -- if not directly in the law as passed by Congress, through precedent once Obama declares a new authorization his sole authority for military action against IS.

Rep. Adam Schiff, D-Calif., ranking member on the House Intelligence Committee, has been pushing the White House to include a sunset of the 2001 authorization as part of the new debate.

"I'm very skeptical about our ability to rewrite the 2001 authorization after we go through a debate on the ISIL operation," Schiff said in an interview. "I'm not sure we have the appetite to go through another round."

Obama has said he wants to refine and ultimately repeal the 2001 authorization. But besides the ISIS campaign, the president also is also using the law as the legal basis for the continued operation of the detention center at Guantanamo Bay and attacks on militants in Yemen and elsewhere.

Obama's proposal includes a three-year limit that would require the next president to come back to Congress and ask for renewal -- if, as Obama predicts, the fight against the ISIS is still ongoing. He also proposes a ban on "enduring offensive combat operations" as an attempt to bridge the divide in Congress over the role of ground troops.

Obama said the language gives him the ability for rescue missions, intelligence collection and the use of special operations forces in possible military action against ISIS leaders. "It is not the authorization of another ground war, like Afghanistan or Iraq," Obama said as he announced the proposal Feb. 11.

But White House officials say they are open to alternatives to that language as long as they maintain the president's flexibility to send in ground troops for targeted missions when needed.

In a signal of the measure's uncertain future, the White House and lawmakers are calling on one another to take responsibility to see the legislation through with neither side wanting to be responsible for the political failure if it doesn't.

"Now they are seeking something, so it's incumbent on them to come up and lay out a way forward," said Senate Foreign Relations Chairman Bob Corker, R-Tenn., who plans to hold hearings on the legislation over the next couple of weeks. In an interview, Corker said he's keeping options open on the best way to proceed -- whether it's by amending Obama's proposal or to "start whole cloth from a clean fresh beginning."