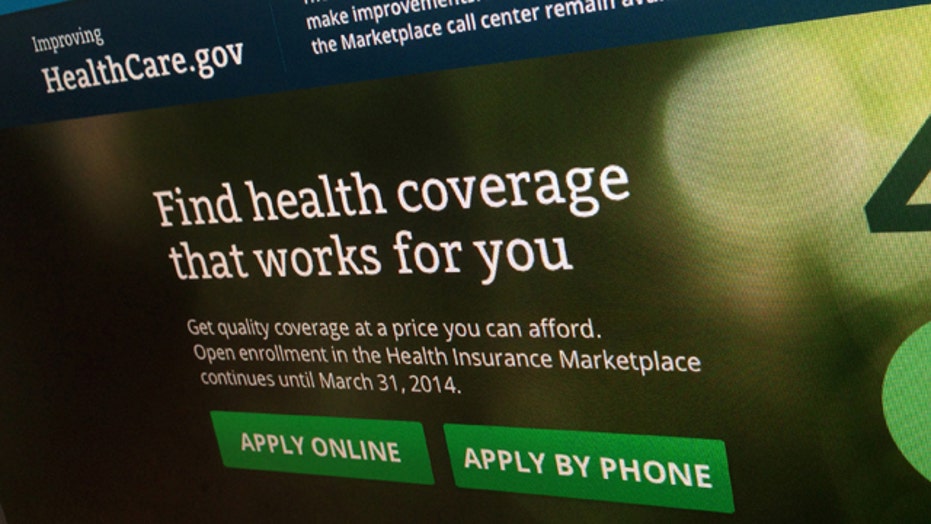 The Obama Administration says they’ve fixed the Healthcare.gov website. So why did the site crash only hours after it was rebooted?

His party's political fortunes and his own legacy on the line, President Obama launched a campaign on Tuesday to once again sell the benefits of ObamaCare to the public, and try to head off a backlash in 2014.

The president, speaking at a White House event flanked by supporters of the law, declared that the Affordable Care Act "is working" and that the flawed website will improve "over time."

"Tell your friends, tell your family -- do not let the initial problems with the website discourage you," Obama said.

"It's not just a broken website, this bill is fundamentally flawed -- causing people to lose the doctor of their choice, causing them to lose their health plan. And if that isn't enough, they're having to pay much higher prices at the same time," House Speaker John Boehner said.

Senate Republican Leader Mitch McConnell said the law is "broken beyond repair," and said repeal, followed by a new bill, is the best "fix."

Obama vowed that the law would not be repealed "as long as I'm president."

Republicans already are threatening to tar the Democratic Party with the health care law's troubled rollout. Obama, meanwhile, is in danger of becoming what Nancy Pelosi was in 2010 -- a party leader whom endangered Democrats in state and congressional races will run from, not with, in the midterms.

As former Pennsylvania Gov. Ed Rendell told Politico: "If it were right now, I don't know that any Democrat running for governor would like the president involved." A host of recent polls have shown Obama's approval ratings hitting record lows.

But the White House is trying to turn the debate around, after weeks of withering and widespread criticism over HealthCare.gov's technical problems and insurance policy cancellations.

After the White House event on Tuesday, the administration plans to spend the next several weeks drawing attention to the benefits of the law.

The president will also take aim at Republican-led efforts to repeal ObamaCare, arguing the GOP is trying to strip away benefits provided under the law without presenting an alternative proposal, one official said.

"Healthcare.gov met our self-imposed November 30th deadline and even as we continue to make improvements to the website, we'll also remind the public about how the Affordable Care Act is already making a positive difference in the lives of millions of Americans today," White House spokesman Josh Earnest said in a statement.

The campaign is aimed at making sure Americans don't shy away from the massive health care program which needs their support in order to thrive.

But the president also needs to change the dynamic in order to assure skittish Democrats that the law is something they can run on in 2014.

Some of the most heated criticism over the past two months has come from Democrats, who lambasted the HealthCare.gov problems and in some cases pushed legislation to delay key elements of the law.

Obama administration officials acknowledged HealthCare.gov is still a work in progress after a key deadline to fix the problems with the online health exchange. The administration had promised a vastly improved shopping experience on the website by the end of November.

The site appeared to generally run smoothly early Monday morning before glitches began slowing people down. By 10 a.m., federal health officials deployed a new queue system that stalls new visitors on a waiting page so that those further along in the process can finish their application with fewer problems.

About 750,000 had visited the site by Monday night - about double the traffic for a typical Monday, according to figures from the Centers for Medicare and Medicaid Services.

The first big test of the repaired website probably won't come for another couple of weeks, when an enrollment surge is expected as consumers rush to meet a Dec. 23 deadline so their coverage can kick in on the first of the year.

Avoiding a break in coverage is particularly important for millions of people whose current individual policies were canceled because they don't meet the standards of the health care law, as well as for a group of about 100,000 in an expiring federal program for high-risk patients.

With the midterm elections less than a year away, it's vital to Democrats that the site lives up to expectations the president set. Republicans have already suggested they'll launch coordinated attacks linking every congressional Democrat up for re-election to the Affordable Care Act.

"President Obama and his administration repeatedly claimed the ObamaCare website would be fully functioning by the end of November, but this has proven to be just another broken promise," RNC Chairman Reince Priebus said Monday. "The Obama administration had over three years to build Healthcare.gov, and all they've produced is a non-functioning website, wasting hundreds of millions of taxpayer dollars."

Federal health officials have acknowledged the importance of fixing back-end problems as insurers struggle to process applications because of incomplete or inaccurate data. Even when consumers think they've gone through the whole process, their information may not get to the insurer without problems.

"We do know that things are not perfect with the site. We will continue to make improvements and upgrades," said Julie Bataille, communications director for the Centers for Medicare and Medicaid Services.