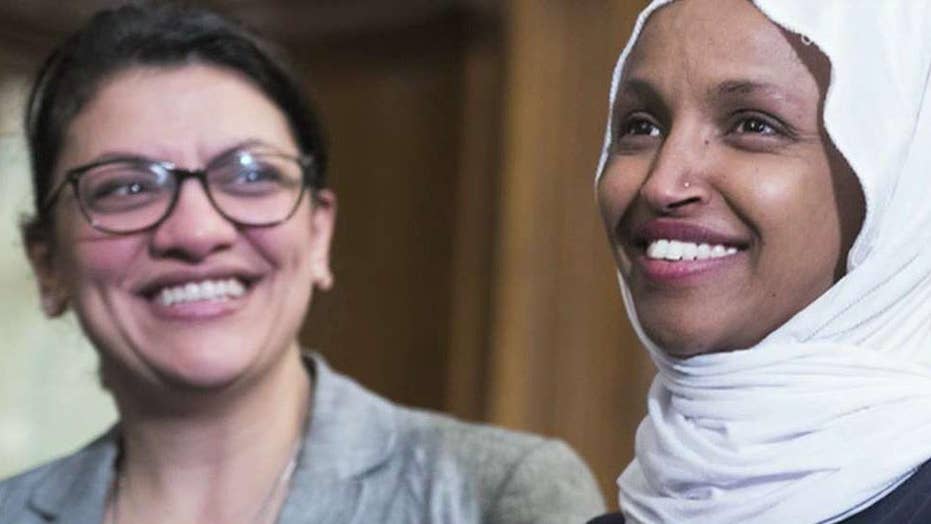 The White House on Monday fired back at Democrats amid reports that they may be planning retaliatory moves in Congress against two top American and Israeli diplomats in response to Israel’s decision to block Reps. Ilhan Omar and Rashida Tlaib from entering the country.

“Congresswomen Rashida Tlaib and Ilhan Omar have a well-documented history of anti-Semitic comments, anti-Semitic social media posts and anti-Semitic relationships,” said White House spokesman Hogan Gidley. “Israel has the right to prevent people who want to destroy it from entering the country – and Democrats’ pointless congressional inquiries here in America cannot change the laws Israel has passed to protect itself.”

According to a weekend report in McClatchy, senior Democrats in Congress are considering legislative action against Ron Dermer, Israel’s ambassador to Washington, and David Friedman, the U.S. ambassador to Israel, in response to the decision not to let Tlaib, D-Mich., and Omar, D-Minn., enter Israel. That could include a possible vote on a statement of no confidence in Dermer, as well as calls for the opening of an inspector general investigation into Friedman.

That comes as Omar and Tlaib have announced plans for a press conference Monday where they plan to discuss “potential policy responses” to Israel’s decision to ban them.

Last week, Israeli Prime Minister Benjamin Netanyahu cited Omar and Tlaib’s anti-Israel statements in saying the government would block them from entering Israel as part of a planned trip.

The move – announced shortly after Trump tweeted that it would "show great weakness" to allow them in – has ignited a massive outcry from Washington Democrats, as Netanyahu's government stands by the decision arguing the U.S. lawmakers have an ulterior, anti-Israel agenda.

“Israel’s denial of entry to Congresswomen Tlaib and Omar is a sign of weakness, and beneath the dignity of the great state of Israel," House Speaker Nancy Pelosi, D-Calif., said in a press release.

Omar and Tlaib, who are Muslim, have been outspoken critics of Israel and have expressed support for boycotts of the country.

Still, while blocking the planned trip, the Israeli government said it would accept a humanitarian request from Tlaib to visit her Palestinian grandmother. But on Friday, Tlaib said she would not travel to the West Bank to visit family, despite getting permission hours before from Israel’s interior minister.

Alleging that “racism and the politics of hate is thriving” in Israel, she said: "I have decided that visiting my grandmother under these oppressive conditions stands against everything I believe in -- fighting against racism, oppression & injustice."

Trump blasted Tlaib’s decision not to visit on humanitarian grounds.

“Rep. Tlaib wrote a letter to Israeli officials desperately wanting to visit her grandmother,” Trump tweeted Friday. “Permission was quickly granted, whereupon Tlaib obnoxiously turned the approval down, a complete setup. The only real winner here is Tlaib’s grandmother. She doesn’t have to see her now!”

Meanwhile, Tlaib’s 90-year-old grandmother, Muftia Tlaib, who lives in the West Bank, used fiery language as she ripped President Trump for his comments about the banned trip: “Trump tells me I should be happy Rashida is not coming,” she said, according to Reuters. “May God ruin him.

Tlaib's family in the West Bank also spoke to Fox News, with her uncle, Bassam Tlaib, saying, "They prevent her because they know she's coming here to see in her own eyes with the delegation, the suffering of the Palestinian people and the violation of the occupation on the people's lives here."