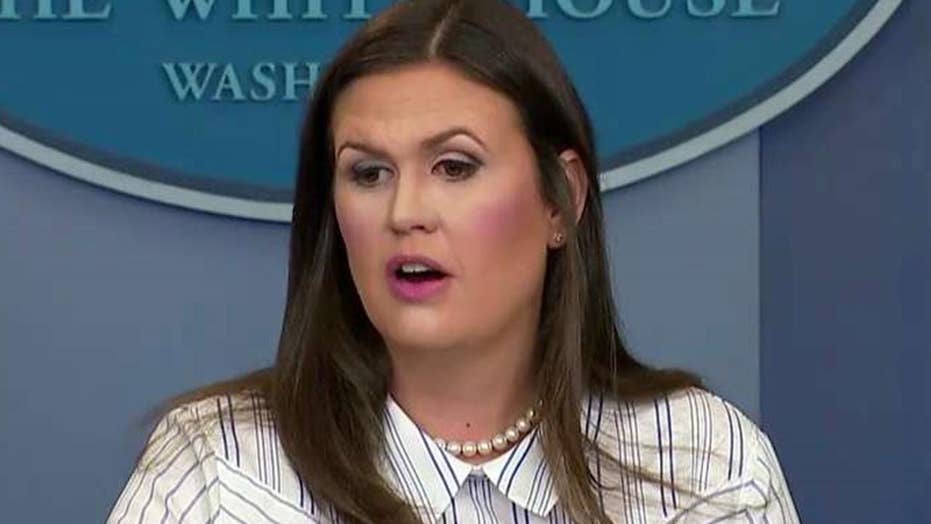 The Department of Justice should consider prosecuting James Comey for his “improper” actions while serving as FBI director, the White House said Tuesday.

Sarah Sanders, the White House press secretary, argued during the daily press briefing that Comey’s actions as FBI director “were improper and likely could have been illegal.”

Asked if President Trump wants the Department of Justice to prosecute Comey, Sanders said that’s “something they should certainly look at.”

Sanders said the former FBI director “politicized an investigation by signaling he would exonerate Hillary Clinton before he ever interviewed her or other key witnesses.”

That’s in reference to new allegations Comey drafted an “exoneration statement” for Clinton weeks before interviewing her during the investigation into her email server.

That’s in apparent reference to Comey’s acknowledgement during a June congressional hearing that he authorized the leaking of a memo about his conversations with the president to the New York Times.

“I think if there’s ever a moment where we feel someone’s broken the law, particularly if they’re the head of the FBI, then I think that’s something [that] certainly should be looked at,” she said.

Her comments were in response to former chief strategist Steve Bannon, who told CBS News' “60 Minutes” that Trump’s decision to fire Comey was perhaps the worst mistake in “modern political history” because it paved the way for the special counsel’s Russia investigation.

Sanders, however, said Trump still stands by his decision to fire Comey.

“The president is proud of the decision that he made,” Sanders said Tuesday. “The president was 100 percent right in firing James Comey. He knew at the time it could be bad for him politically, but he also knew and felt he had an obligation to do what was right.”

She added: “He’s very happy with the decision he’s made and I think he’s been fully vindicated."

On Monday, Sanders accused Comey of giving “false testimony,” though she did not specify what testimony she was citing.

NEW PRESSURE ON COMEY TO RETURN TO CAPITOL HILL

Sen. Lindsey Graham told Fox News’ Catherine Herridge last week that he wants to bring back Comey to Capitol Hill, over concerns about Comey's statements on the conclusion of the Clinton email case.

Comey is the focus of two known investigations, including a Hatch Act investigation by the Justice Department’s Office of Special Counsel.

The Justice Department’s inspector general is also looking into Comey’s handling of the Clinton email investigation, and whether he violated procedures and went outside the chain of command when he announced in July 2016 he was not recommending criminal charges for Clinton.

Comey was fired by Trump in May amid tensions over the Russia probe.

Meanwhile, Sanders also announced during Tuesday’s briefing that the president planned to travel to Florida on Thursday to tour the destruction from Hurricane Irma.

“Those details are still being finalized,” Sanders said. “We hope to have some of that ironed out later today and we’ll certainly keep you guys posted on that travel.”