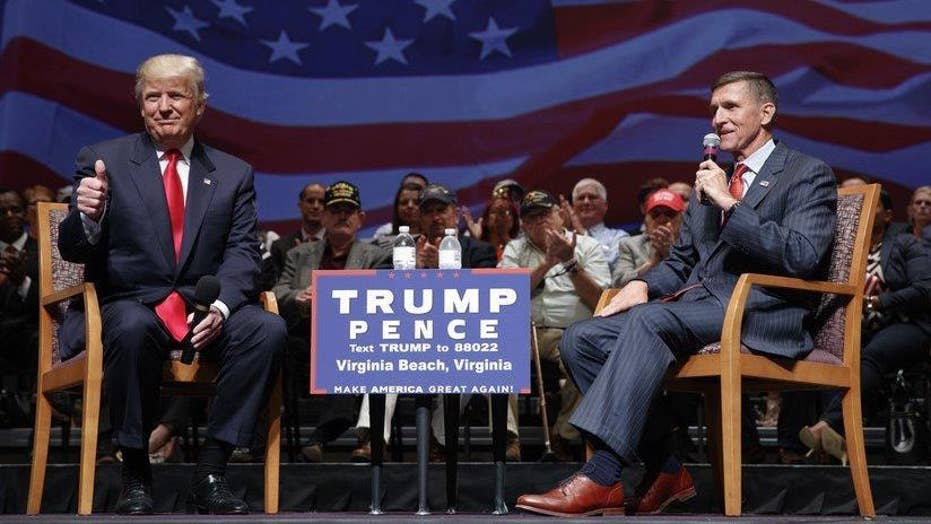 The White House grappled late Tuesday with the political ghost of James Comey, as an explosive new report said a memo written by the ousted FBI chief claimed President Trump once asked him to end the probe into former national security adviser Michael Flynn.

The White House sharply disputed the report, as Democrats seized on it as potential proof of "obstruction" of justice.

According to The New York Times the memo quoted Trump as saying he hoped Comey could "let this go" with regard to Flynn.

The Times said Comey wrote the memo shortly after an Oval Office meeting on Feb. 14, the day after Flynn resigned from the Trump administration. The paper acknowledged it had not seen a copy of the memo, but said a Comey associate read parts of it to a reporter over the phone.

The memo was presented as the clearest evidence yet that Trump tried to influence the Justice Department and FBI probe into Russian meddling in the 2016 campaign and alleged links to Trump’s associates.

But the White House rejected the characterization that the president tried to shut down an investigation.

According to the Times, Comey wrote in the memo that Trump told him Flynn had done nothing wrong. But Comey did not say anything to Trump about limiting the investigation, replying, "I agree he is a good guy."

Acting FBI Director Andrew McCabe also testified last week on Capitol Hill that there “has been no effort to impede our investigation to date." The FBI had no official comment on the Times report Tuesday.

The Justice Department also declined to comment on the New York Times report, on the existence of the Comey memo, or whether there was any such conversation between Trump and Comey.

A law enforcement source confirmed to Fox News that Comey documented a meeting with Trump that made him uneasy. The source added that the former FBI director is a copious note-taker, dating back to his days as a federal prosecutor.

Last week, the Senate intelligence committee subpoenaed Flynn for documents related to its investigation into Russia's actions during the 2016 election campaign.

Other congressional committees and the Pentagon's inspector general are also separately examining whether Flynn was fully forthcoming about his foreign contacts and earnings from organizations linked to the governments of Russia and Turkey.

Trump’s inner circle has been dogged by critical reports about his discussions behind closed doors. His team is still grappling with a Washington Post report that he shared classified details on an ISIS threat with visiting Russian officials – the White House has defended Trump’s discussions as “wholly appropriate.”

But more broadly, Trump has faced growing accusations from Democrats that he fired Comey last week out of frustration with the Russia investigation.

“Enough is enough,” Rep. Adam Schiff, D-Calif., the ranking member of the House intelligence committee, told reporters moments after the Times report was published. “Congress really needs to get to the bottom of this.”

Senate Minority Leader Chuck Schumer, D-N.Y. said on the Senate floor that he was “shaken” by the report.

“On a day when we thought things couldn’t get any worse, they have,” Schumer said. “Concerns about our national security, the rule of law, and the independence of our nation’s highest law enforcement agencies are mounting … the country is being tested in unprecedented ways.”

Sen. Dick Durbin, D-Ill., said in a statement that Trump's request "appears to cross the line into ... obstruction of justice" and called for the appointment of a special prosecutor.

House Oversight Committee chairman Jason Chaffetz, R-Utah, requested that the FBI turn over all documents and recordings that detail communications between Comey and Trump by May 24.

House Speaker Paul Ryan, R-Wis., had no immediate comment, but his spokeswoman AshLee Strong said, "We need to have all the facts, and it is appropriate for the House Oversight Committee to request this memo."

House Majority Leader Kevin McCarthy, R-Calif., told Fox News he had not read the Times report, but said, "In today’s Washington, I find there are a lot of allegations and small truths."

Sen. Richard Burr, R-N.C., the chairman of the Senate intelligence committee, told reporters the Times was obligated to produce the memo.

"I could write something and I could read it over the phone and tell them that it came from [Comey]," he said. "If they're reporting it and they've got somebody that's got the document, they need to get the document and get it released."

Burr added that that he and ranking member Sen. Mark Warner, D-Va., had met with Comey the day before he was fired last week.

"The director of the FBI shared more information with Sen. Warner and myself than any director has ever shared," Burr said. "I think something as material as that probably would have been something he would have shared, had it happened."