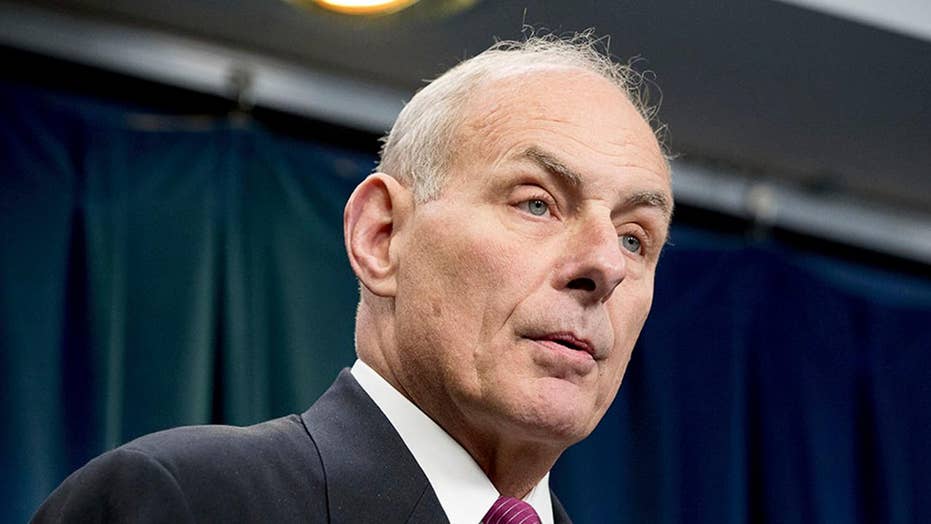 One-on-one with the White House Chief of Staff on 'The Ingraham Angle.'

In a wide-ranging interview on Fox News’ “The Ingraham Angle” Monday night, hours after charges were announced against former Trump campaign chairman Paul Manafort, White House chief of staff John Kelly said the administration believes the law should run its course before jumping to conclusions.

“All of the activities, as I understand it, that [Paul Manafort and his aide Rick Gates] were indicted for were long before they ever met Donald Trump, or had any association with the campaign,” Kelly said. “I think the reaction of the administration is let the legal justice system work — everyone’s … presumed innocent and we’ll see where it goes.”

Asked if a special counsel is necessary regarding the recent revelations that the Clinton campaign and Democratic National Committee funded research that led to the controversial dossier of allegations about President Trump’s connections to Russia, Kelly said he believes U.S. citizens have a right to know what’s going on behind the scenes of their government.

The former secretary of homeland security added he believes special prosecutors such as Robert Mueller should be “very, very objective,” people “who can get to the bottom of these accusations.”

Kelly noted that it’s important for the American people to know things unless it’s classified information. “You saw Mr. Trump do this the other day when he demanded that the JFK documents be released in their entirety with … few redactions, but nothing held back.”

Meanwhile, days after Defense Secretary Jim Mattis claimed threats of nuclear missile attacks by North Korea have been accelerating, Kelly said that, “with the help of countries like China,” he hopes North Korean leaders will “come to their senses” and end their country's secretive nuclear program.

The chief of staff reiterated that North Korea with nuclear weapons is an issue that keeps him up at night.

“There’s no reason for them, they serve no purpose for that country,” Kelly said of atomic weapons in the rogue nation. He added that there’s hope that the Chinese “exert pressure on the leadership in North Korea, and we have great hopes for the Russians as well.”

In addition, more than a week after Florida Democratic Rep. Frederica Wilson had a spat with Kelly regarding a phone call Trump had made to the widow of Army Sgt. La David Johnson’s widow — which Wilson listened in on — Kelly said he has no regrets.

Kelly said at a White House news briefing on Oct. 19 that Wilson's "selfish behavior" stunned him. "It stuns me that a member of Congress would have listened in on that conversation, absolutely stuns me. ... I thought at least that was sacred."

“No, never,” when asked if he felt he should apologize for the situation and his comments. “I’ll apologize if I need to, but for something like this — absolutely not. I stand by my comments.”