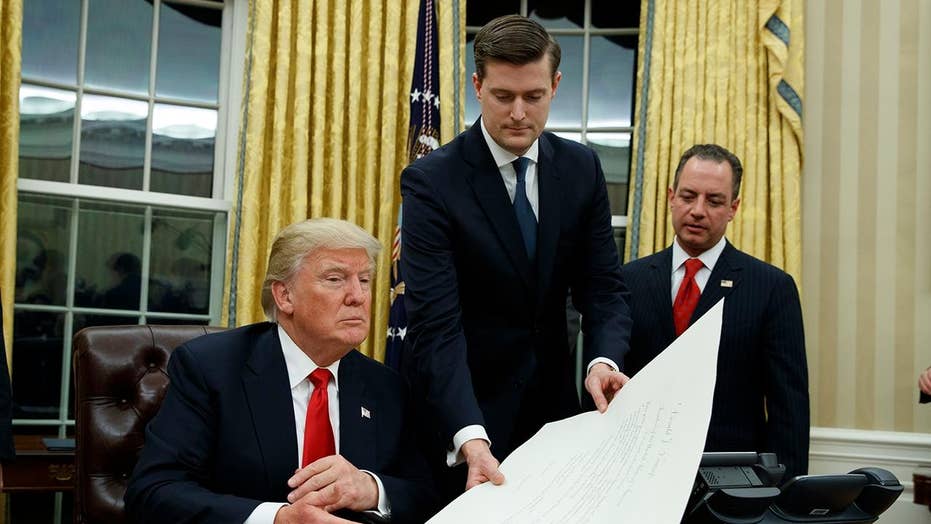 White House Staff Secretary Rob Porter announced his resignation Wednesday following a report that he had allegedly abused two of his ex-wives.

While White House senior staff, including Chief of Staff John Kelly, initially defended Porter, the latest report from the DailyMail.com included a photo of one ex-wife’s bruised face. She told the outlet that Porter choked and punched her during their marriage.

Senior staff and press staff were meeting throughout the day on the matter, White House sources said. During the White House briefing on Wednesday, Press Secretary Sarah Sanders said Porter had been “effective in his role” and the president had “confidence in his performance.”

Sanders also said that Porter would not leave immediately.

“He’s resigning from the White House but will stay on to ensure a smooth transition forward,” Sanders told reporters.

Porter, meanwhile, pushed back strongly on the allegations in the press.

"These outrageous allegations are simply false. I took the photos given to the media nearly 15 years ago and the reality behind them is nowhere close to what is being described. I have been transparent and truthful about these vile claims, but I will not further engage publicly with a coordinated smear campaign,” Porter said in a statement provided by the White House.

“My commitment to public service speaks for itself. I have always put duty to country first and treated others with respect. I am deeply grateful for the opportunity to have served in the Trump Administration and will seek to ensure a smooth transition when I leave the White House.”

As staff secretary, Porter was a senior aide in Trump’s White House working in large part to manage the documents crossing the president’s desk.

Kelly later issued another statement. “I was shocked by the new allegations released today against Rob Porter. There is no place for domestic violence in our society,” he said, according to The Hill.