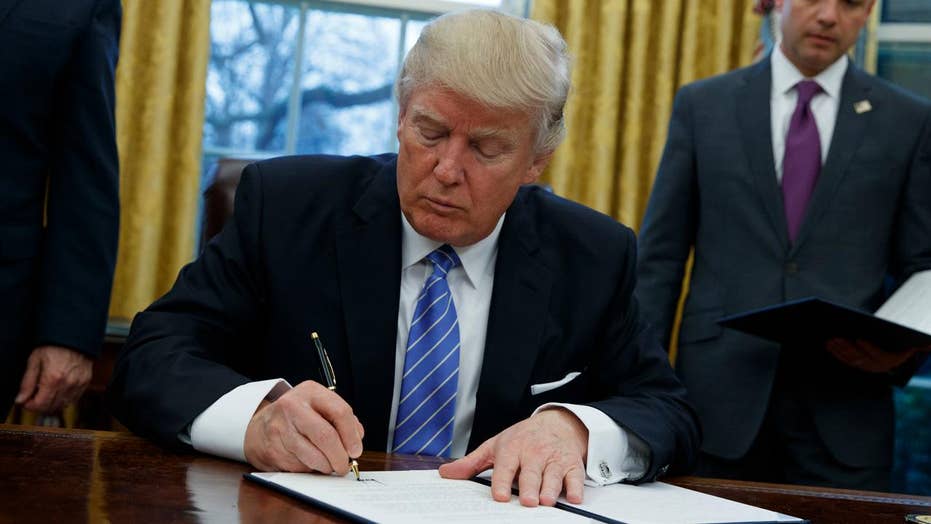 Despite having pulled out of the trade deal last year, President Trump has reportedly asked his top trade officials to negotiate re-entering the Trans-Pacific Partnership (TPP).

He told a group of Republican senators at the White House he would ask Robert Lighthizer, the U.S. trade representative, and Larry Kudlow, his national economic council chairman, to “get it done,” Sen. Ben Sasse, R-Neb., told Fox News.

In a tweet, Trump said he would consider joining TPP "if the deal were substantially better" than the one former President Barack Obama had negotiated.

Trump has been highly critical of the 2016 trade deal, especially when he was a presidential candidate.

Read on for a look at what the deal is and what the president has said about it.

What is the TPP?

Representatives from 11 nations signed the Trans-Pacific Partnership agreement in March 2018 without the U.S. (Reuters/Rodrigo Garrido)

The trade deal was a massive free-trade agreement pushed by the Obama administration. The deal included the U.S. and 11 other countries along the Pacific Ocean, including: Australia, Brunei, Canada, Chile, Japan, Malaysia, Mexico, New Zealand, Peru, Singapore and Vietnam.

“Right now, the rules of global trade too often undermine our values and put our workers and businesses at a disadvantage,” he said in a statement. “TPP allows America – and not countries like China – to write the rules of the road in the 21st century, which is especially important in a region as dynamic as the Asia-Pacific."

Signed in February 2016, the deal was supposed to provoke investment among the 12 regions, which together make up about 40 percent of the global economy, the BBC reported at the time.

However, the countries involved needed to ratify the agreement in order for it to actually go into effect. Trump’s presidency, which began less than a year later, complicated that.

Trump withdrew the U.S. from the trade deal through an executive order in January 2017. Last month, the remaining 11 countries signed a deal without the U.S.

What were the criticisms against it?

Delegates rally against the Trans-Pacific Partnership trade deal at the Democratic National Convention in 2016. (Reuters/Carlos Barria)

Opponents of the deal, including labor unions, argued it would be a threat to manufacturing jobs and encourage exports of jobs to lower-wage countries overseas.

If TPP would be enacted, the U.S. would lose 448,000 jobs, according to a study from Tufts University’s Global and Environment Institute. In comparison, the study found a total job loss of 771,000 across all 12 nations involved in the deal combined.

Hillary Clinton, the 2016 Democratic presidential nominee, broke with the Obama administration in opposing the deal. She expressed concern that it would benefit drug countries and wouldn’t combat currency manipulation, Time magazine reported.

President Trump once called TPP a "continuing rape of our country" but has reportedly signaled that he's willing to re-negotiate the deal. (Reuters/Kevin Lamarque)

Trump has been critical of TPP, not holding back.

“The Trans-Pacific Partnership is another disaster done and pushed by special interests who want to rape our country, just a continuing rape of our country,” Trump, then a presidential candidate, said in 2016. “That’s what it is, too. It’s a harsh word: It’s a rape of our country.”

Trump also railed against the deal – and Republicans who supported it – on social media.

Upon withdrawing the U.S. from the deal in 2017, Trump said his move was a “great thing for the American worker.”

But in January 2018, Trump floated the possibility of re-negotiating terms and re-entering the TPP, noting that he would consider signing back on only if he could make a “substantially better deal.”

"As I have said, the United States is prepared to negotiate mutually beneficial, bilateral trade agreements with all countries. This will include the countries in TPP, which are very important," Trump said at the World Economic Forum in Davos, Switzerland. "We would consider negotiating with the rest, either individually, or perhaps as a group, if it is in the interests of all."