Bill Weld: I'm in second place in the Republican primary

Bill Weld, the former Massachusetts governor making a longshot challenge for the 2020 Republican presidential nod, has aggressively gone after President Trump since his campaign launch -- calling him a “one-man crime wave” and even suggesting Attorney General Bill Barr “erred” by not indicting the commander-in-chief.

Trump— known for punching back at even the slightest slights —has thus far ignored his GOP opponent, as his campaign says they’re not concerned about the primary.

WELD CALLS ON TRUMP TO RESIGN

But as Weld hits Trump on character, the president could have a few obvious openings to hit back if he so chooses.

Trump’s easiest talking point, should he decide to engage Weld down the road, could be party loyalty.

Weld left the GOP in 2016 to run as vice president on the Libertarian Party ticket with Gary Johnson. He endorsed Barack Obama over John McCain in the 2008 presidential race, though he backed Mitt Romney in 2012 over Obama.

“Trump might try to paint him as a Massachusetts liberal – but Weld can fact check him on that,” Republican political strategist Liz Mair, a leader in the Republicans for Johnson/Weld group in 2016, told Fox News. “The Cato Institute ranked him one of the most fiscally conservative governors in the United States.” 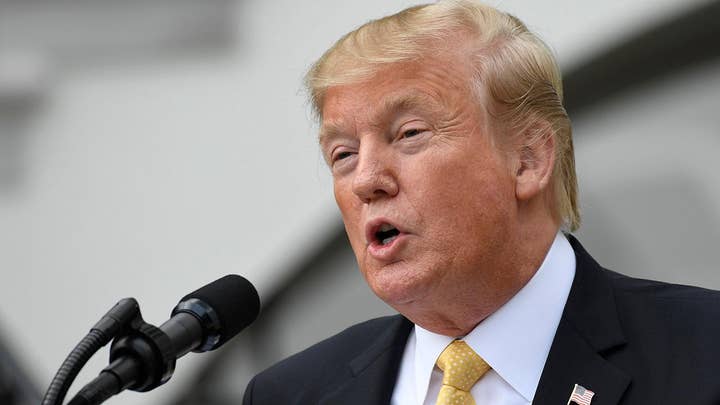 Weld also faced a legal controversy regarding a school he ran more than a decade ago – though the school was later exonerated and more recent media accounts said the probe potentially stemmed from a vendetta against Weld.

The federal probe surrounded Decker College, a for-profit school in Louisville, Kentucky, that taught carpentry, electrical and other construction trades. Weld became the school’s CEO in January 2005, when it was already having some financial problems that he sought to turn around.

In August 2005, Weld entered the race for the Republican nomination for governor of New York, with the backing of several county Republican chairman and state Republican Party chairman Stephen J. Minarik III. He also raised about $3 million for the campaign, more than any other Republican. Then in December, The New York Times ran a story headlined, “Ghost of a Shuttered College Follows Weld.” The questions slowed his momentum, and he dropped out in June 2006 before the primary.

Weld handed control of Decker College to bankruptcy trustee Robert Keats. But in 2012, a bankruptcy judge Thomas Fulton sided with officials of the closed college and, in 2016, Education Department administrative law judge Robert Layton said the accrediting agency, the Council on Occupational Education, provided “factually erroneous” information to the federal government that caused it to withdraw student aid from the college.

The council pulled the accreditation after getting a call from Federal Student Aid official Ralph LoBosco. Keats reportedly said LoBosco sought revenge against Weld. That’s because as a U.S. attorney in the 1980s, Weld prosecuted LoBosco’s former employer for fraud.

The Education Department did not respond to an inquiry for this story.

Trump, while staying out of the scrum for now, attacked Weld during the 2016 campaign, saying, “I don’t talk about his alcoholism, so why would he talk about my foolishly perceived fascism?” The Boston Globe cited reports that Weld had appeared publicly inebriated several times, which Weld has denied.

“Trump tried to call him a drunk in 2016, but it’s factually inaccurate and I think Trump was just trying to provoke him,” said Mair. “If you were a Republican governor of Massachusetts, it isn’t easy to provoke you.”

In an email, the Weld campaign said it would attempt to get a response for this report, but did not respond to several follow-up requests.

Other issues, while not of a legal nature, also could emerge should Weld’s campaign gain momentum.

Weld is on the board of directors for Acreage Holdings, a cannabis company. However, it’s widely known that as a governor and as a vice presidential candidate for the Libertarian Party, Weld favored relaxed drug laws. Former Republican House Speaker John Boehner also sits on the Acreage Holdings board.

“Weld is on the board of a pot company, which might be an issue, but might actually help in New Hampshire,” Mair said, noting the libertarian bent of the “Live Free or Die” state.

The president also could note that Weld is the only federal candidate that former Special Counsel Robert Mueller contributed to, according to the Center for Responsive Politics, which tracks money in politics. Mueller donated $450 to Weld’s unsuccessful campaign against then-Sen. John Kerry in 1996.

Weld also was a registered lobbyist from 2007 to 2011 for the international law firm McDermott, Will & Emery, and represented defense contractor Raytheon, CNX Gas Corporation, Sony Electronics and shoemaker New Balance, according to government watchdog The Center for Public Integrity. Weld advocated for issues such as cap-and-trade legislation, shoes for Armed Forces members and recycling electronics, according to CPI.

There’s nothing illegal about lobbying, a freedom protected under the First Amendment. Still, because of various excesses over the years, lobbying is among the least popular occupations. When Trump talks about the Washington “swamp,” it conjures up the cozy relationship between politicians and lobbyists.

Interestingly, McDermott, Will & Emery formerly represented Trump’s former personal lawyer Michael Cohen in the Russia probe at a time when Cohen was firmly on Trump’s side. Cohen claimed in a lawsuit the Trump Organization stopped paying the firm for his legal defense when he flipped on Trump. Stephen Ryan, who leads the firm’s government strategies practice, was formerly Cohen’s counsel before the former Trump lawyer began cooperating with prosecutors.

Weld is a member of lobbying firm ML Strategies, but isn’t listed as a lobbyist with the firm, according to CPI. The firm says Weld “provides clients with counsel related to government strategies, litigation, and general business advice.”