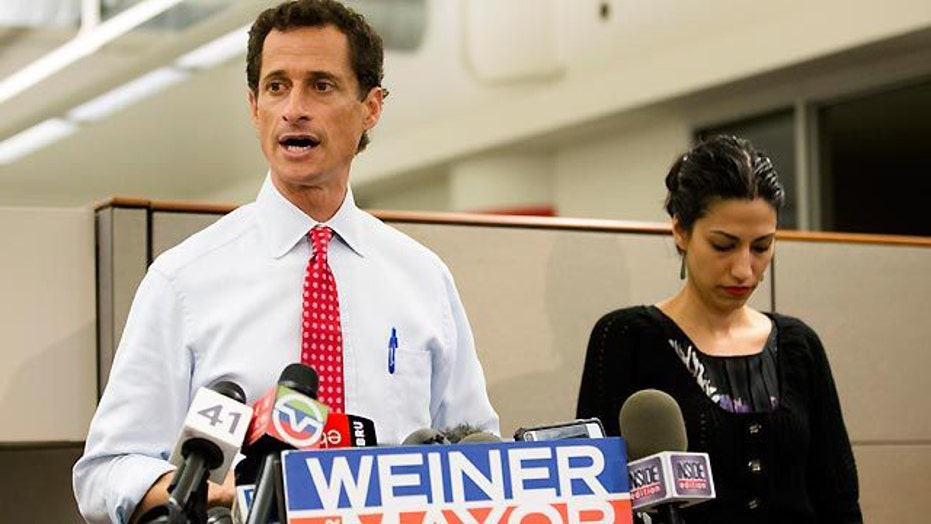 New York mayoral candidate and sexter Anthony Weiner admitted Thursday to having lewd online conversations with as many as three women since leaving Congress in 2011, as a new poll showed a sharp drop in his political support.

The married Democrat told reporters he thinks he's had the racy online chats with a total of six to 10 women -- with no more than three of them happening after he resigned from the House over similar conduct.

But that's three more than voters knew about a few days ago. Weiner on Tuesday fessed up to one online relationship that he pursued after leaving Congress. With the ex-congressman now acknowledging more, it's unclear how heavily it will impact his campaign.

The poll was conducted entirely since the details from Tuesday emerged. The Democratic primary is set for Sept. 10.

"For many Democrats, the latest revelations about Anthony Weiner are more of the same, only more so," said Dr. Lee M. Miringoff, director of The Marist College Institute for Public Opinion. "Weiner has lost his lead and his negatives are at all time high."

Thursday's poll also showed a majority of New York Democrats -- 55 percent -- have an unfavorable impression of Weiner while 30 percent have a favorable opinion. That represents the highest negative rating he has received this election season.

Almost half -- 46 percent -- said Weiner's online sexual relationships would impact their vote and almost three in four -- 73 percent -- said support from his wife Huma Abedin would have no impact on how much they trusted him.

Weiner told reporters Tuesday he would not quit the mayor's race despite growing calls from supporters to do so.

Weiner has shrugged off calls to withdraw from the race from multiple media outlets and congressional colleagues.

Weiner did say Thursday that he's still "working with people" to get help dealing with his penchant for X-rated online flirting. But he disputes any suggestion that it's an addiction.

It got steamier Thursday, when the gossip site The Dirty posted what it says is a lewd photo of Weiner that he sent to a woman last year.

But he was quickly losing Democratic officials' support.

"I think he should pull out of the race," Democratic Rep. Jerrold Nadler said. "I think he needs serious psychiatric help."

Rep. Charles Rangel, D-N.Y., said he believes the voters will put an end to Weiner's ambitions.

Weiner told reporters Wednesday night that while the uproar of recent days had "been rough," he felt "these are things I brought upon myself." He added he was "pressing forward."

The ex-congressman was greeted with boos as he took the stage at a public housing meeting earlier Wednesday evening but by the end of his remarks, the crowd had started cheering.