The head of a conservative watchdog group said Thursday that Democratic Rep. Maxine Waters is inciting "mob violence" with her call for protesters to confront Trump officials in public, as he urged a formal ethics investigation on Capitol Hill.

"When you’re out there ... inciting mob violence against sitting Trump Cabinet members, that doesn’t obviously reflect credibly on the House," Judicial Watch President Tom Fitton told "Fox & Friends." "And the House has to decide whether they’re going to allow its members to use the House as a platform and its power and position to attack and incite violence."

Judicial Watch earlier sent a letter to the House Office of Congressional Ethics calling for an investigation into whether the California Democrat violated ethics rules with remarks she made in Los Angeles telling supporters to “push back” on Trump officials seen in public.

“If you see anybody from that Cabinet in a restaurant, in a department store, at a gasoline station, you get out and you create a crowd and you push back on them! And you tell them that they are not welcome, anymore, anywhere,” Waters said last month.

Those comments came after White House Press Secretary Sarah Sanders and Homeland Security Security Kirstjen Nielsen were pressured to leave restaurants amid the controversy over the administration’s immigration enforcement policies.

Waters has since said she was not calling for violence and accused President Trump of lying about her comments.

But Fitton, in his letter, wrote that her remarks were in violation of House rules requiring representatives to conduct themselves “in a manner that shall reflect credibly on the House.”

Fitton said Thursday that Waters should be reprimanded or even expelled from the House over her remarks.

“You can bet there is an increase in security costs for all Cabinet officials as a result of her rhetoric and comments,” he said.

He also encouraged voters to urge their representatives to act in reprimanding Waters. 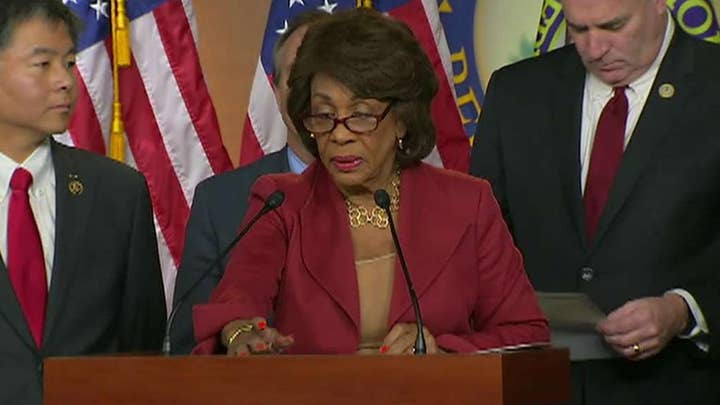 “It is so dangerous out there in my view for Trump supporters generally and Trump public officials that someone has to step in and rein them in and the House has an opportunity here,” he said.

Trump has been leading the pushback against Waters, and has claimed that she is “the FACE of the Democrat Party.”

“Her ranting and raving, even referring to herself as a wounded animal, will make people flee the Democrats!” he tweeted Tuesday.

Waters' comments and other protests against Trump officials were prompted by outrage over the practice of separating families caught illegally crossing the border, as a result of the administration's "zero tolerance" policies. Trump has since moved to end those separations.

Democratic leaders, meanwhile, have pushed back against Waters' comments. House Democratic Leader Nancy Pelosi distanced herself from Waters' remarks, while Senate Democratic Leader Chuck Schumer took to the Senate floor to say that harassment of political opponents was "not right" and "not American."

On Sunday, Waters expressed surprise that she had been criticized by fellow Democrats.

"One of the things I recognize, being an elected official, is in the final analysis, leadership ... will do anything that they think is necessary to protect their leadership and so what I have to do is not focus on them," Waters said on MSNBC.