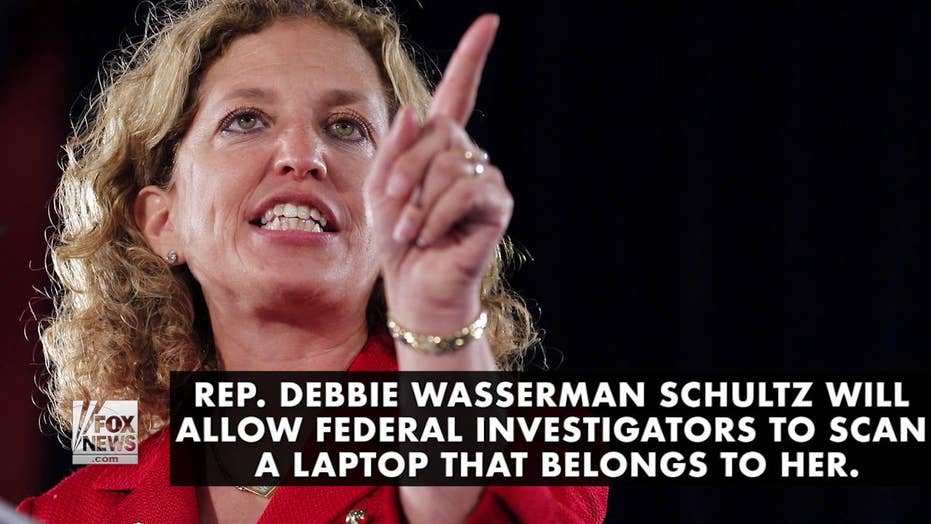 Debbie Wasserman Schultz to cooperate in IT probe

Florida Congresswoman Debbie Wasserman Schultz will allow investigators probing a federal IT security case to access her laptop, after months of stonewalling

The former head of the Democratic Party who lost her post in the fallout from a massive email breach is expected to start cooperating with federal investigators in a separate cybersecurity case, after months of apparent stonewalling.

Fox News has learned that Democratic Rep. Debbie Wasserman Schultz plans to allow federal investigators to scan a laptop belonging to her as part of a complex probe into allegations of computer theft, over-billing and possible email hacking.

U.S. Capitol Police have had the laptop for months and until now had been unable to get access. It's unclear why the Florida lawmaker and ousted Democratic National Committee chairwoman had been battling law enforcement over the computer; however, her counsel began negotiating this week with Capitol Police in connection with the probe.

At least five IT contractors who worked for dozens of House Democrats including Wasserman Schultz purportedly took hundreds of thousands of dollars’ worth of computer equipment and potentially hacked into the lawmakers’ email accounts.

The contractors, all members of a Pakistani-Muslim family, also are being investigated for a possible procurement scam in which they allegedly bought computer equipment, then overcharged the House administrative office.

In addition, sources say the contractors had “unauthorized access” to the House computer system.

House Democrats have stood by the contractors, privately and publicly suggesting their heritage prompted the probe and is contributing to fear-mongering.

There is no indication that Wasserman Schultz has been accused of wrongdoing. The USCP has declined to comment on the case, a standard response in ongoing investigations. But the agency recently told Fox News the probe focuses on “the actions of House IT support staff.”

Wasserman Schultz’s office declined to comment Tuesday on the situation or the congresswoman’s apparent shift.

However, the south Florida lawmaker, who has a primary challenger next year, has publicly resisted USCP efforts to look at the contents of her computer -- even suggesting “consequences” for the agency if the computer was not promptly returned.

Verderosa replied: “It’s generally turned back over to the owner of a property. If it’s part of an ongoing case, then there are other things that have to occur for that to happen.”

“It is their equipment, and it is supposed to be returned … I think you’re violating the rules when you conduct your business that way. And you should expect that there will be consequences.”

The Daily Caller New Foundation reported, based on information from an unnamed federal employee with knowledge of the situation, that investigators found a laptop used by lead contractor Imran Awan as officials were closing in on him and his brothers.

The story stated the laptop was found stashed in the Rayburn House Office Building and seized as part of the probe. But whether the seized computer is the one that belongs to Wasserman Schultz remains unclear.

Imran Awan did IT contract work for House Democrats from at least 2005. News of the investigation broke in February. However, Wasserman Schultz kept Imran Awan on her payroll for at least about a month, though he also had been denied access to the House computer network.

Investigators appeared to be blocked from accessing data on the congresswoman’s laptop without her consent based on the Constitution’s “Speech and Debate” clause.

There was speculation when news of the investigation broke that the alleged cybersecurity breach was linked to the hacking and publication of Democratic National Committee emails during the 2016 White House race, which led to Wasserman Schultz’s resignation late last summer. Fox News is told that no longer appears to be part of the probe.

The DNC also was accused of denying law enforcement access to their servers during that cyber-crisis last year.

House staffers continue to be concerned about whether their emails were hacked by the contractors.

Official documents and multiple sources say at least five contractors -- including brothers Imran, Jamal and Abid Awan -- are the focus of the probe but that as many as six people could be involved.

The equipment they allegedly removed from offices includes computers and servers.

Other troubling allegations have surfaced.

In one instance, police in January were called to the northern Virginia home of a woman identified in the incident report as the stepmother of the Awan brothers. The woman alleged the brothers were keeping her away from her dying husband. Abid Awan told police her bedside visits were causing their father additional stress and claimed he had full power of attorney over him.

But Awan also had money troubles, contributing to concerns about the contractors' access to sensitive emails and how that could be used. Awan declared bankruptcy in 2012 with more than $1.1 million in debt.

Court documents show the debt included roughly $51,150 to the Congressional Credit Union, for two cars and a credit line. And Virginia court records show he has had 19 violations since 2009, mostly traffic-related offenses.