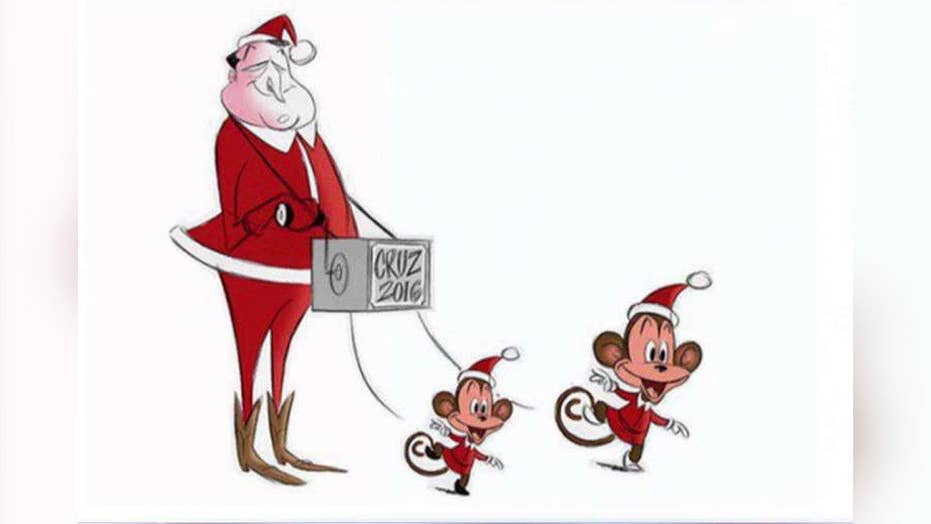 As of midnight Wednesday, the webpage where the cartoon by Ann Telnaes had been shown was replaced by a note from the Post's editorial page editor, Fred Hiatt.

"It’s generally been the policy of our editorial section to leave children out of it," Hiatt wrote. "I failed to look at this cartoon before it was published. I understand why Ann thought an exception to the policy was warranted in this case, but I do not agree."

Politico reported the cartoon was in response to an online ad released by Cruz's campaign that depicted him reading politics-related Christmas stories to his daughters, 7-year-old Caroline and 4-year-old Catherine. Telnaes herself referenced the ad on Twitter earlier Tuesday.

Earlier Tuesday, the Texas senator criticized the Post on Twitter over the cartoon, which depicted him as an organ grinder dressed in a Santa Claus costume while two similarly-clad monkeys danced on leashes in front of him. The cartoon was captioned, "Ted Cruz uses his kids as political props."

Cruz was backed in his criticism by Republican rival and fellow Senator Marco Rubio, himself a father of four.

Cruz, though, is hardly the first candidate – of either party – to use his family and kids in a campaign ad.

Hillary Clinton’s first presidential campaign featured footage of daughter Chelsea in a 2007 ad, and her second showed a photo of she and Bill Clinton’s first grandchild in an ad earlier this year.

Telnaes, who won a Pulitzer Prize for Editorial Cartooning in 2001, had no immediate comment on the cartoon being pulled, but posted a link on Twitter late Tuesday to an article titled "Organ Grinders and Their Monkeys Once Entertained on DC Sidewalks"