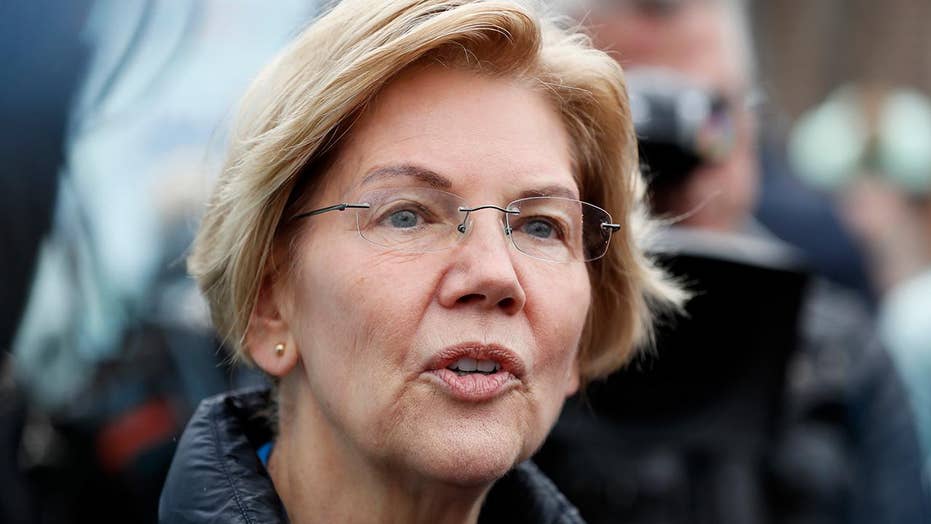 Democratic presidential candidate Elizabeth Warren is facing deepening skepticism, including from some in her own party, over her "Medicare-for-all" plan -- as she not only claims the middle class won’t be hit with a tax hike but even suggests billionaires alone can fund it.

As Fox News first reported, Warren on Friday outlined a plan costing $52 trillion over the next decade, including $20 trillion in new spending -- covered largely by an array of taxes on corporations, the wealthy and employers in general. While insisting the middle class would be spared, Warren, D-Mass., went a step further in Dubuque, Iowa, over the weekend when pressed by reporters.

“It doesn’t raise taxes on anybody but billionaires,” Warren said. “And you know what, the billionaires can afford it, and I don’t call them middle class.”

When pressed again whether anyone with under $1 billion net worth would feel a tax hike, she said: “That’s right—not paying a penny more.”

“Understand this. This is no increase in taxes for anyone except billionaires,” she said. “Period. Done.”

The Joe Biden campaign fired back that Warren's statement was "simply not true."

"Her plan would create a new tax on employers of almost $9 trillion that would come out of workers' pockets, a new financial transaction tax that would impact investments held by middle class Americans, and a new capital gains tax that would affect far more people than she stated tonight," Deputy Campaign Manager and Communications Director Kate Bedingfield said in a statement.

The Warren campaign’s detailed Medicare-for-all plan claims costs can be covered by a combination of existing federal and state spending on Medicare and other health care—as well as taxes on employers, financial transactions, the ultra-wealthy and large corporations, and some savings elsewhere.

Notably, they include what is essentially a nearly $9 trillion payroll tax increase on employers—something economists generally say can hit workers in the form of reduced wages. Biden's campaign argues this would certainly hit the middle class.

Warren’s proposal, as she referenced in Iowa, indeed calls for a tax increase explicitly on billionaires, expanding a previously announced wealth tax to hit them harder.

However, the plan also calls for raising capital gains taxes for the "top 1%."

Even The New York Times noted this would extend beyond billionaires, reporting: "In 2017, the top 1 percent of tax returns had income above roughly $515,000, according to the Internal Revenue Service -- about 1.4 million tax returns in total."

A Warren campaign spokesperson later walked back her weekend statement, telling the Times that the Massachusetts senator was referring specifically to her wealth tax proposal when she said taxes would only increase for billionaires -- acknowledging that taxes would increase for the top 1 percent under the plan.

But the campaign faces skepticism beyond the debate over the billionaire burden.

A recent study released by the bipartisan Committee for a Responsible Federal Budget declared it would be "impossible" to finance any such plan using only taxes on the wealthiest Americans.

And The Wall Street Journal editorial board challenged other calculations, especially her claim that the plan would translate to $20 trillion in additional spending, whereas other estimates for Medicare-for-all have put the cost roughly $10 trillion higher.

“That leaves $30 trillion to finance, but Senator Warren waves her wand and says the bill will really be $20.5 trillion. She makes the rest vanish by positing magical savings from things like ‘comprehensive payment reform,’” the Journal wrote.

The Biden campaign also charged that "Senator Warren has been lowballing the cost of her plan by well over $10 trillion while overcounting the revenue that would be gained from the sources she identifies. The bottom line? Even more tax increases on the middle class will be inevitable."

Medicare-for-all’s chief Senate champion Bernie Sanders, I-Vt., has pitched a plan estimated to cost an extra $32 trillion over 10 years. Sanders told ABC News over the weekend that his proposal is “far more progressive” than Warren’s, and said that her plan could have a “very negative impact” on the economy and job creation.

“The function of health care is to provide health care to all people, not to make $100 billion in profits for the insurance companies and the drug companies. So, Elizabeth Warren and I agree on that,” Sanders told ABC News. “We do disagree on how you fund it. I think the approach that I have, in fact, will be much more progressive in terms of protecting the financial well-being of middle-income families.”

Sanders has acknowledged that his Medicare-for-all plan would raise taxes on the middle class, but he argues it would lower the cost of health care for most Americans.

Biden himself slammed Warren’s numbers in a Friday interview with PBS. “She’s making it up,” he said.