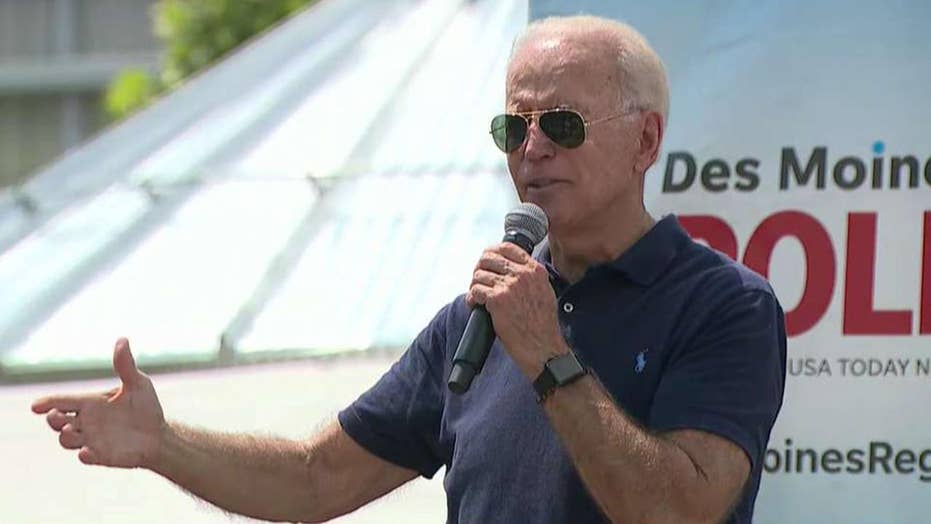 Joe Biden faced an onslaught of verbal jabs at last week’s second round of Democratic presidential primary debates, but a new poll in the state that votes first in the nominating calendar is the latest to indicate the former vice president came away unscathed.

A Monmouth University survey released Thursday of likely Iowa Democratic caucuses goers also points to a surge by Sen. Elizabeth Warren of Massachusetts and slippage for Sen. Bernie Sanders, the other progressive standard-bearer in the record-setting field of some two-dozen White House contenders.

THE MOST RECENT FOX NEWS POLLS IN THE 2020 PRESIDENTIAL CAMPAIGN

Biden stands at 28 percent support in the poll, the first survey in Iowa conducted after the back-to-back nights of debates. The former vice president stood at 27 percent in Monmouth’s previous poll in the first caucus state, which was conducted in April.

Warren’s in second place, with 19 percent support, up seven percentage points from Monmouth’s April survey. Warren won praise from political pundits and analysts for her performances in the first two rounds of debates. Sen. Kamala Harris of California registered at 11 percent, a four-point bump from the previous Monmouth poll.

Sanders, the independent senator from Vermont who’s making his second straight White House bid, clocked in at nine percent in the new survey, down seven points from April.

The poll’s Thursday release came as almost the entire field of Democratic candidates is in Iowa to speak and greet voters at the Iowa State Fair in Des Moines and the Democratic Wing Ding in Clear Lake, and a slew of other high profile forums and events.

The new survey is the third live operator poll this week – following a national poll by Quinnipiac University and a Suffolk University poll for the Boston Globe in the first-in-the-nation primary state of New Hampshire -- to indicate Biden holding onto his front-runner status, which he’s enjoyed since even before he announced his candidacy in late April.

The biggest factor boosting Biden – as witnessed in other surveys – is electability. Nearly three-quarters of those questioned said they would prefer a Democratic nominee who could beat Republican President Trump next year even if they disagree with that candidate on most of the issues.

“These results are just another sign that the electability factor continues to accrue in Joe Biden’s favor. This comes despite, or more likely because of, the attacks he has been weathering of late,” Monmouth University Polling Institute director Patrick Murray said.

Sen. Amy Klobuchar of neighboring Minnesota came in at three percent in the survey, as did billionaire environmental and progressive advocate Tom Steyer. The philanthropist and former hedge fund manager jumped into the race just last month, but has blanketed Iowa airwaves with TV campaign commercials.

Sen. Kirsten Gillibrand of New York and entrepreneur Andrew Yang registered at two percent in the poll. It helped Yang reach the second of two thresholds to make the stage at the third and fourth rounds of debates, which will be held next month and in October.

To qualify for those debates, candidates much register at two percent in four polls accepted by the Democratic National Committee – the Monmouth Iowa poll is on that list – and must reach at least 130,000 contributions from individual donors. Yang has now met both criteria.

Everyone else listed in the poll came in at less than one percent. That includes O’Rourke, who stood at six percent in Monmouth’s April survey.

The poll was conducted August 1-4, with 681 Iowans likely to take part in the state’s February Democratic caucus questioned by live telephone operators. The survey’s sampling error is plus or minus 4.9 percentage points.