MANCHESTER, N.H. – – Democratic presidential candidate Sen. Elizabeth Warren highlighted her new universal child care plan and explained her support for reparations for black Americans affected by slavery as she campaigned Friday night in the state that holds the first primary in the race for the White House.

Taking questions from reporters after headlining the New Hampshire Democratic Party’s McIntyre-Shaheen 100 Club fundraising gala, Warren pointed to the country’s “ugly history of racism” as she explained her support for the proposal.

“We need to confront it head-on and we need to talk about the right away to address it and make change,” Warren added.

The idea of reparations for black Americans affected by slavery is also backed by at least two other Democratic presidential candidates – Sen. Kamala Harris of California and former San Antonio Mayor Julian Castro, who served as housing secretary under President Barack Obama.

The push by some Democratic White House hopefuls points to the further importance of race and identity issues within the party. While supporters say reparations are needed to address slavery and other racist aspects of American history, some critics say such a move could cost several trillion dollars.

The senator has long faced criticism over her claims of Native American heritage, and recently apologized to the Cherokee Nation for last autumn’s release of DNA results in a bid to prove she had Native American ancestry dating back at least six generations.

Warren used her much of her address to more than 900 Democratic officials, federal, state and local lawmakers, rainmakers, and party activists in New Hampshire to showcase her new universal child care and early education proposal.

“We’re the richest country in the history of the planet. Access to high-quality care and education during the first five years of a child’s life shouldn’t be a privilege reserved for the rich,” she said to a standing ovation, one of around 10 that she received during her address.

Warren emphasized that “high-quality child care should be a right for every child in America.” 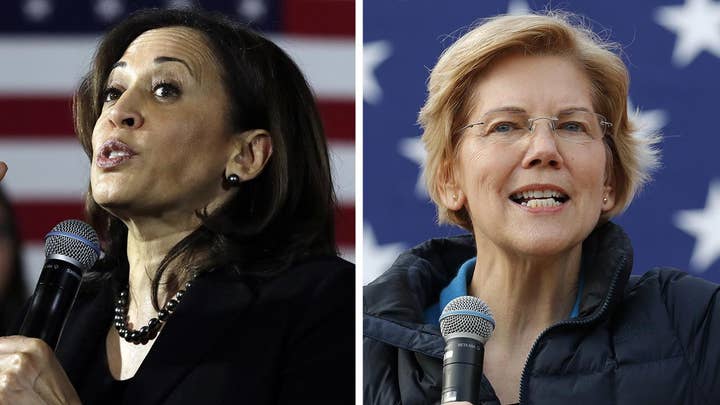 The senator touted that her plan “would provide high-quality care and education for free for millions of families and at low cost for everyone else.”

Warren claimed that she could pay for her plan “without raising taxes one thin dime for working families.”

She said revenues from the ultra-millioanires tax that she recently proposed would “cover the cost of this universal child care and early education plan.”

“Asking the 75,000 wealthiest families in this country to pay a little more would cover the cost of providing affordable and high-quality child care and early education options to every child in our country,” she added.

“Whether it’s government-run health care, taxpayer-funded jobs for all, or universal daycare, nothing is free and ultimately these proposals do nothing but raise taxes and expand big government. The financial burden always falls on the taxpayer,” RNC spokeswoman Mandi Merritt said.

"Ultimately these proposals do nothing but raise taxes and expand big government."

But that kind of criticism doesn't fly with Manchester, N.H., Bergen Ambrose, who said as she waited in line after the speech to take a selfie with the senator that “I’m sold on Elizabeth Warren.”

Ambrose, who recently moved to the state from Massachusetts, said the controversy over Warren’s claims of Native American heritage didn’t trouble her.

“That is nothing in comparison to the scandals that we’ve seen on the Republican side” she explained. “I feel like she is the voice of the people.”

But Granite State native and Derry, N.H., resident Alyssa Wadlin is undecided at this early point in the campaign.

“I’m definitely excited about Elizabeth Warren. I’m excited about Kamala Harris, too. Those are my two front-runners,” she explained. “Elizabeth answered a lot of things that I wanted to hear from her tonight.”

Wadlin said beating President Trump in the general election was the most important factor in her decision.

Friday night’s speech kicked off a two-day swing by Warren through the Granite State. It’s her fourth visit to New Hampshire since launching her campaign Dec. 31. Many political observers consider New Hampshire a "must win" state for a presidential candidate from neighboring Massachusetts. Bay State White House contenders have a long history of winning the first-in-the-nation primary. Think most recently of Democratic Sen. John Kerry in 2004 and former Republican Gov. Mitt Romney in 2012.

But the state is also a "must win" for Sen. Bernie Sanders, who hails from neighboring Vermont. On Tuesday, the independent senator and fellow populist firebrand launched his second straight bid for the Democratic presidential nomination.

The night before Warren returned to New Hampshire, Sanders held a conference call with many of his top Granite State supporters from his 2016 campaign.

A top Sanders supporter and adviser who was on the call told Fox News that the senator told them that “New Hampshire’s extremely important and he made that point very clearly, how important it is for all of us to work as hard if not harder than we did last time and win again.”

The supporter, who asked to remain anonymous to speak more broadly, said that most of the leading Sanders supporters in New Hampshire are “all with him again.”